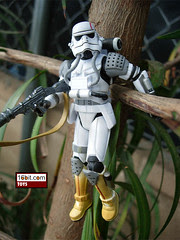 Bio: Trained to survive the galaxy's most treacherous weather conditions, EVO Troopers are equipped with enhanced armor that can deal with hazards such as extreme heat, acid rivers, and lightning. Each EVO Trooper's FA-3 fléchette launcher fires shards of metal capable of hitting multiple targets. (From the figure's packaging.)

Image: A tree in a yard, presumably their natural habitat.

Commentary: The entire The Force Unleashed line was originally scheduled for 2007, as they were shown to the public about a year before hitting stores. I've always wondered if, somewhere out there, there's concept art for unproduced coins for figures like this EVO Trooper, which (I guess appropriately) recycles weapons from the original Evolutions action figure set from 2005. Rather than take its guns straight from the game, for some reason it includes twin pistols from the Star Corps trooper and the large weapon from the Sandtrooper. The sculpt is pretty much right on the mark, though, and it's essentially a slightly bulky but still super articulated action figure.

The figure has a removable backpack and some hoses leading to his chest, which makes it look like he's prepared to survive some tough environments. However, the figure's chest console has a flat, white space that looks like a sticker or tampo should be applied there to make it look like there are lights or buttons or something. As it is, it looks like someone made a mistake on the design. Also, there's a very thick layer of what is either dirt or cat urine coating his lower legs almost completely, which is a little much and distracting from the distinctive red stripes painted on the figure's shins. It's rare that I'd consider asking Hasbro for a repaint that drops a paint application, but in this case, I bet it might make for a slightly better looking figure.

Collector's Notes: EVO Troopers first came out on 30th Anniversary packaging with a coin. In August of 2008, you could buy newly packaged Legacy Collection figures with a droid part replacing the stand. His companion, the Jumptrooper, was not brought back into circulation. At this time, the figure is not planned to ship in new assortments.

I've never played Force Unleashed, and I'm a 30 year SW fan who's getting a bit of clone fatigue. I've long since given up on being a loose figure completist, now I just by only what I think is cool.

This EVO trooper guy is COOL.

You own me, Hasbro.