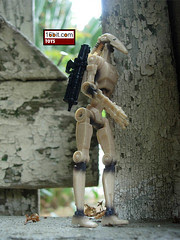 
Image: Some decaying door near my apartment.

Commentary: There are four variations on this Battle Droid, all with the same packaging-- this one is "clean," as it is lacking in the brown sludge, lightsaber cuts, or blaster damage. In other words, it's the "normal" one.

At Comic-Con this year, Hasbro announced that a new Battle Droid mold is being produced which intends to replace this one in terms of articulation and the ability to sort of fold up as seen in the movie. I find it hard to believe that it's really, actually happening, because this original release served us well for so long. His joints were strong, his limbs were thick, he could stand up for months at a time in a hot room without warping. He was all things other Battle Droids weren't. The figure seems to have been engineered before Lucas completed the droid's personality and movements, but still, it's a good replica of how they look on the big screen. Most importantly, it was one of the most articulated figures of its day with knees and elbow joints, which was pretty much unheard of for Hasbro Star Wars until it started to become a regular thing around 2004-2005.

If your collection has a Battle Droid focus, this is a good one to grab. Most collectors I know gravitate toward all droids that aren't Trade Federation or Separatist-related, given the designs I don't always blame them, but this is one of the few molds that turned out particularly well for this character. It's well worth a look!

Collector's Notes: The 1999 Battle Droid mold didn't see a heck of a lot of use. Other future droids used this paint job, or one very close to it, but the mold itself wasn't exactly a frequently used one. This was the first time Hasbro cranked out four variations of a figure in a single case, too.

I loved this guy when he came out, but I have to differ with you, Adam, on his ability to hold him form. The battle droids tend to be the stickiest figures in my collection, and I had to segregate them from the other Separatists due to their drunken leanings and, eventually, collapses. A neat design and the likeness is there, but I wish they had been from stiffer plastic.