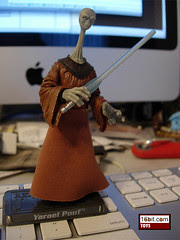 Bio: Jedi Master Yarael Poof is skilled with the use of a lightsaber, but his preferred means of combat is mind tricks, which he uses with incredible proficiency to confuse his opponent. He is present on that fateful day when Qui Gonn-Jin brings young Anakin Skywalker before the Council for training. (Taken from the figure's cardback.)

Commentary: The pin-headed Yarael Poof was killed off in a comic before Attack of the Clones came out, and his figure didn't first hit until 2003.

This is the second of (so far) two releases. The first one has a seat and no lightsaber. This one has a lightsaber and a stand. They're pretty much identical, or are close enough where I've made a decision not to review both the 2002 Saga Scenes version and the 2007 The Saga Collection releases.

As articulation goes, this figure has a fairly odd setup which prevents it from standing on its own. Dig this: the hips are one piece, like the 1990s Jawas or a Playmobil figure-- so you can't have one leg sit and the others not, they both move together. He has knee joints, so he can basically look awkward or be posed better while sitting. He also has swivel wrists and swivel biceps, so this is a figure engineered from the get-go to be a figure that sits. Actually, his first release was packaged sitting down, and it seems like Hasbro didn't ever really plan on anyone trying to get him to stand up. That's why I'm pretty happy that this release (the second one) has a display stand. Oh, and the lightsaber? A clever reuse of the McQuarrie Concept Stormtrooper's weapon, which is why it looks unlike any other lightsaber from any other Jedi figure.

The figure is, overall, pretty good. 2002 and 2003 sculpting tends to hold up well for the most part, short of fixing some articulation and gravity woes the figure is about as good as it can get. There are lots of wrinkles and folds, and the deco is really something. But if you only get one, make sure a stand or seat is included. Otherwise this figure is basically worthless and will fall over.

Collector's Notes: This figure is a semi-repack of a previously released Yarael Poof.

Email ThisBlogThis!Share to TwitterShare to FacebookShare to Pinterest
Labels: Attack of the Clones, Jedi Knights, Saga, The Phantom Menace, TSC

He's not a great figure by any means but i was glad of this re-release as it justified my decision to not buy into what I felt were the over-priced 'scene' collection. Proof of what you like to say, Adam -- if you're patient almost everything is released again somehow.

He's only got the two arms? Some sources say he hid another pair under his cloak, suggesting he might be of the same species as podracer Gasgano. Neither of them are Kaminoans, but they've all got similar long necks....