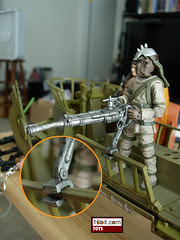 Bio: Jabba the Hutt employs Nikto to serve as guards in his palace and on his sail barge and skiffs. The Nikto are a warrior species that are used to hot desert climates, making them suitable for Jabba's purposes-- until that fateful day at the Pit of Carkoon. (Taken from the figure's cardback.)

Commentary: It took a while, but Hasbro finally released this Nikto Gunner-- the second modern-era Nikto and the third unique Nikto character to be made as an action figure. (The 1984 one remains unproduced in the modern line.) Unlike the others, this is the first-ever Nikto with super-articulation and a removable hat, plus a giant cannon weapon that, according to early reports, was designed to clip on to a hypothetical Sail Barge which may never get made. The good news is you don't have to wait for a Sail Barge to use it, because it clips onto the side of the existing Tatooine Skiffs and was likely designed with that in mind in the first place. (Take a look at the picture.)

The figure itself is sculpted like one of the best Hasbro has done, but the deco leaves something to be desired. For example, rather than sculpting various straps and bandoliers as part of the figure, they were made as separate pieces which can be manipulated or in the case of the legs, rotated around. (These rings on his thighs? Separately molded elements.) Given Hasbro's desire to cut costs and all, it doesn't make sense unless they're planning to use this body for another, unknown figure in the future. The hat is also removable, which is going to be great for reusing the head, but the hat doesn't secure terribly well. On the bright side, the blaster fits perfectly in the holster, and the figure has no problems standing around or grasping the cannon with his 14 points of articulation.

So, how about that deco? The figure is molded in a nice enough earth toney color, but the attempt at making it dirty just looks sloppy. It's not subtle, there's just brushings of green on it that make it look like a customizer tried to make a figure look dirty, a far cry from Hasbro's usual efforts. All of the painted straps, skin elements, and facial features are painted precisely where they should be, although the skin does seem dark. Once you get past that, the face is full of awesome detail like little wrinkles and horns that bring the figure to life. As Skiff Guards go, Hasbro put a lot of effort into this one and as such it's worth picking up if you're a fan of characters from Jabba's Palace. Heck, get two if you can, odds are you'll want more of those cool cannons.

Collector's Notes: This is a brand-new figure in every sense of the word. As such you may not have seen it in stores yet.

Email ThisBlogThis!Share to TwitterShare to FacebookShare to Pinterest
Labels: Jabba's Palace, Return of the Jedi, TLC