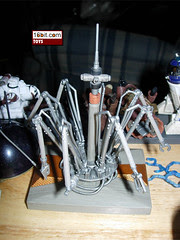 Image: On a TV tray.

Bio: The Jawas come to the Lars homestead to offer droids for sale. One of the droids they show Owen Lars is a WED Treadwell droid, a common utility droid with multiple manipulator arms and goggle-like photoreceptors on a telescoping neck. (Taken from the figure's cardback. I wonder if they meant this other configuration.)

Commentary: While Galoob made a micro figure of the WED Treadwell Droid in the 1990s, this multi-armed automaton was basically ignored in larger scales until earlier this year, when Hasbro packed it with yet another Jawa. This one has multiple articulated arms and a swivel base, making it a pretty solid release given that it comes with a fairly well-designed Jawa too. The deco is pretty true to the movie-- it's simple, mostly off-white, with an orange stripe and some silver. It almost looks too nice for a piece of junk some short chirping aliens picked up out of the desert, but hey, it's a toy. It's a whole mess of moving parts, so it seems like a terrible toy but a great collectible figure. It's not a ton of fun to play with, but if you already own a Sandcrawler, a dozen Jawas, and a few moisture vaporators, you should probably consider this the must-buy figure of 2009. Or whatever year it is when you stumbled on this.

Collector's Notes: It's a pretty distinctive figure and well worth picking up simply because it's the first time it's ever been made. A new version may be made some day, but for now, this is it.

This is a fantastic figure. Luke's blue no-armed treadwell seemed to breathe a sigh of relief when I removed all the bent sandtrooper sticks, (I can't believe those X-wing cannon looking things have survived 3 different packagings), that had been substituting as appendages. Good thing I used hot glue and not crazy glue!

It's weird, but this and that domed droid feel incomplete without hidden "wheels" under them so they can roll. Glad they made them both, though.

I picked up this a few weeks back, love the arms! Felt like a buy one get one free pack as well.