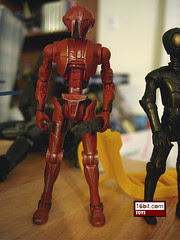 Bio: HK-47 was a Hunter-Killer assassin droid and Jedi hunter constructed by Revan shortly after the beginning of the Jedi Civil War to assassinate those who Revan believed would destabilize the galaxy. (Stolen from Wookieepedia.)

Commentary: While I enjoy poo-pooing some Knights of the Old Republic fans' requests for figures, even I can't deny that some of the designs for the robots and villains are stunning. HK-47 in particular looks both like a modern design or something that would have been at home as an original creation in the vintage Kenner line. Seriously, if this was some random thing that Luke had to fight, I'd believe it. Its red eyes, battle-damage, and panels seem like something out of a bygone, yet decidedly futuristic, era. The figure's parts come split between 6 different figures, actually, technically, 12 total. Each limb, when combined, will give you a super-articulated figure that's pretty fantastic. If you're a fan of the character, this figure should do right by you. Aside from the neck-- which isn't a ball-joint-- it's about as good as you should reasonably expect of a figure of this construction. Oh, but there's no ball joints at the shoulders, just FYI.

My only real beef with the figure is that he doesn't seem to like holding his gun too much. A lot of figures have this problem, but given there were no rubber bands to deform his hands, there's less of an excuse. It should just work, and unfortunately, it didn't for me. But hey, those that want this figure should still try and track it down.

Collector's Notes: You can't really use the RA7 limbs with it, because HK-47's are longer, but I suppose you could make a lopsided pile of junk if you wanted. This wave is a little difficult to find currently, so who knows what the future holds for this very popular game character. A silver repaint is, of course, on the way shortly.

I just finished the first Knights of the Old Republic game, and they put a lot of personality into HK-47. After that, I started the sequel game, and HK-47 plays a big role in the beginning of that too. Again, lots of personality there. The graphics on these older games are a little lacking, but this figure goes way over the top in visualizing this great character.