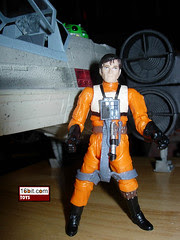 Bio: From the book I, Jedi! Rogue Squadron pilot Corran Horn searches for his wife who has disappeared while on a covert mission to track down pirates. The Force-sensitive Horn is accompanied on his quest by his astromech droid R2 Whistler, who has programs useful in detective work, escape and evasion. (Taken from the figure's packaging.)

Commentary: I've never seen fans sour on a toy series quite so quickly as the 2009 Droid Factory packs, which were announced as $13 sets but ended up being closer to $17. The reasons for the price increase are unclear, so you might be left wondering if Corran Horn is worth the asking price. Given the $8 retail on basic figures, it doesn't seem incredibly outlandish although it certainly does carry a slight sting, although nobody seemed to gripe when Wal-Mart's Death Star Compactor scenes were released at a price nearly double that of basic figures. But I digress.

Corran Horn is an OK figure on his own merits. He uses the Pilot Luke Vintage body, warts and all, with a new head and redeco helmet. So he's short, and for some reason he has a Darth Vader-esque lightsaber and hilt with a blue blade. On the cover of I, Jedi he seems to have his hair shaved down and a green lightsaber. This figure has longer hair and a blue lightsaber. Another figure from Wizards of the Coast has him in green Jedi garb and a beard with a blue lightsaber. So it's kind of tough to say just how accurate it is since he's had pretty few officially licensed visual reference images created on his behalf. Obviously, it would be nice to see a slightly taller body, but this is what it is. For those of you who just want another pilot, or have a soft spot for the character, Hasbro's figure seems to take elements from a few of these illustrations to make a decent looking toy. I find this figure to be as welcome to my ranks of Rebel pilots as any other, so odds are you'll probably enjoy this one as long as you aren't too picky.

Collector's Notes: This figure seems to hold the distinction of most acceptable by most fans, who have taken a collective dump on this assortment. It does not seem to be the strongest seller so far, but hey, you never can tell.

Corran Horn is supposed to be SHORTER than Luke, so if anything, the figure is too tall in reusing the (well-scaled) Luke body.

Just saw this and wanted to add a couple of quick notes. Corran Horn is the hero in Michael Stockpole' Star Wars X-Wing series of books. The comics featured more on Wedge Antilles. In all the books, Corran's flightsuit was CorSec green as was his droid and X-Wing. The Whistler figure in the packaging is also wrong as he should look more like R2-X2. Not one of Hasbro's best, but at least its something.

Where can i to buy??? its very difficult!!