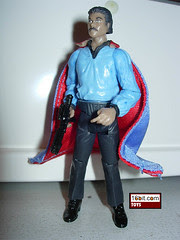 Bio: Lando has betrayed Han and his companions to the Empire, but now he has had second thoughts about his desision. Knowing he will lose everything, he nevertheless sets in motion a plan to free Leia, Chewbacca, and the droids. He calls in Cloud City guards to subdue the stormtroopers who are escorting the prisoners, giving them all a chance to get to the Millennium Falcon and escape Vader's clutches. (Taken from the figure's cardback.)

Commentary: As one of the worst-selling figures in the Original Trilogy Collection Vintage assortment, it's a little surprise to not only see that Lando Calrissian again, but at a lower price with an added play feature. While the original figure did have 14 points of articulation-- all replicated here, down to the swivel elbows-- it did not have the same cape. Here, the figure is colored in more bright colors, and the cape has a bright red lining and a wire running along the base. This lets you pose it in a variety of ways, which really adds to what you can do with Lando rather than merely look at him. More than anything else, it's the cape that makes the figure distinctive-- otherwise it's pretty much the same as the original release, minus some slight color tweaks. I like this one the best, despite it being less authentic.

Collector's Notes: This is the second use of this Lando mold, but the only use to include wire in the cape. As such, it's worth getting. The only feature missing from this figure is a way to remove the cape.