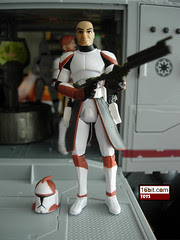 Image: On a Turbo Tank.

Bio: Clone Commander Ponds battles to liberate the Separatist-occupied world of Ryloth. The commander and Jedi Mace Windu lead clone troopers in a fight to clear a way through battle droids to capture Lessu, the planet's capital city. (Taken from the figure's cardback.)

Commentary: The most impressive thing about Commander Ponds is that it proves my ongoing ranting about just how important paint is to an action figure. To look at it, you might not know that the figure's entire construction is essentially Captain Rex minus the pauldron, and with a new helmet. The short blonde hair was just left unpainted, so now he looks nearly bald. How about that? It's a crying shame they didn't do the same thing for Target's Commander Fox in 2008, which has a very awkward looking long neck as a sort of failed experiment to put Obi-Wan's helmet head on the Rex body. But I digress.

Ponds is a good replica of the character from the show. The patterns and coloring are fairly accurate, which is great for a figure which wasn't exactly named on-screen. He has no problems using his weapons, as to be expected since it's based on a good, existing figure, plus the helmet isn't too snug or too loose. If you want it sitting higher or lower, it'll hold in place quite nicely. It also has the little notch in the chin, which was introduced with the first figures in 2009 and will probably be added to any new clones from here on out. So hey, all those troopers you bought last year? They're all a little off model and now you can re-buy them all. How about that?

The figure has standard TCW Clone articulation, which is 14 joints plus those extra wrist joints which allow for better weapon-handling and hand-signaling. The kama gets in the way of the figure sitting, as usual, so just be aware of that. Overall I really like this one, it's pretty colorful and it doesn't look like anything else in the cartoon clone pile yet.

Collector's Notes: This figure was announced during Comic-Con 2009 as a late September/early October gift-with-purchase promotional release. In reality, it hit the first week of August for $9.99. Also, and I may be mistaken, I believe this is the first-ever Hasbro Star Wars product to sport the new silver "R Exclusive" sticker rather than the brightly colored one used in some variation or another for the past several years.

Adam, to me this figure epitomizes what you were saying about distribution in your Q&A this week. He was scarce but findable in my area; when I traveled to a con nearby, a dealer said he couldn't find the guy anywhere, yet ten minutes down the road at a TRU they had about 30 of him. Nice figure, and I agree one of the better CW repaints.

Luckily, Ponds has been easy to find in the TRUs of central and southwestern Connecticut. Unfortunately, however, he's also the *only* new figure I've seen at TRU in a long time.