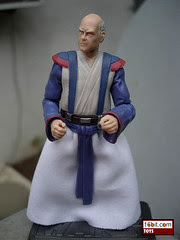 Bio: In his sketches, concept artist Ralph McQuarrie evokes the graceful power of a ninja master or samurai warrior in his drawing of Obi-Wan.

Commentary: An odd pairing-- a concept from Star Wars packaged with a concept from its sequel-- but Obi-Wan Kenobi is a strange look at what might have been. Loaded with articulation, the figure has 12 points of movement-- meaning that in this case, the knees are missing. He can basically sit or stand without too much fuss, but when it comes to the McQuarrie figures it seems we buy them less for the "toy" appeal than the "shelf" appeal. This is a sub-collection you get to display to show off how enlightened you are to alternate versions of your favorite characters.

Obi-Wan Kenobi is notable in that he really does look a fair amount different from what we saw on the big screen. No facial hair, no toupee, and lots and lots of purple. Overall, the McQuarrie Concept figures might have made the line more toyetic, with bright colors all over the place to make them pop a little more on the shelves. I mean, when you compare this purple and white figure, complete with red trim, against the earthtoney subtlety of the standard release it's quite striking. As collectors I daresay the regular version is a little more attractive and less goofy, but the toy junkie in me sees this as a particularly worthwhile edition of a character that's probably on version #47 by now. As to if you should get it or not, I'd say if you like how it looks, go for it. Otherwise save your cash.

Collector's Notes: That white cloth robe piece? Gets dirty. Be careful. On the bright side, this set isn't too expensive if you're patient. But do expect to pay a slight premium over the issue price.