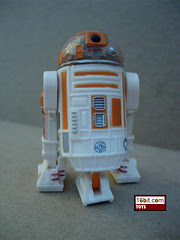 Bio: Developed for service aboard capital warships and battle stations, these droids look much like R2 units except for their clear plastex domes that show off their computer processors. (Taken from the figure's box.)

Commentary: Astromech droid repaints are something fans asked for since the line started, and really didn't get much of until around Episode I. This particular release came much later. R3-A2 was a Toys "R" Us Exclusive repaint of R3-T7, and if you have ever seen pictures of R3-A2 you know that this figure is off-model. The big difference between the movie and the toy is that in the movie, he's lacking the orange square around the central eye. This would mean when Hasbro releases a new version, you can probably either dump this figure or consider it a different character entirely. The bright orange highlights look great, and you can see in the clear dome easily.

As far as articulation goes, he's pretty standard stuff. Twist the dome, move the legs, the third leg can be pulled down, and each foot has an "ankle" on which to swivel. This body type was basically the standard for astromech droids from 2001-2005, with a few more using this form later still. As such, it doesn't quite mesh with today's build-a-droid figures or the repaints of R4-G9 sold over the years, but it's a neat looking little guy and one of few bright orange robots you can add to your toy box.

Collector's Notes: Released once in a boxed set, this little guy has never seen another release. But fear not-- Hasbro has a new version of him planned as a build-a-droid in an upcoming wave.