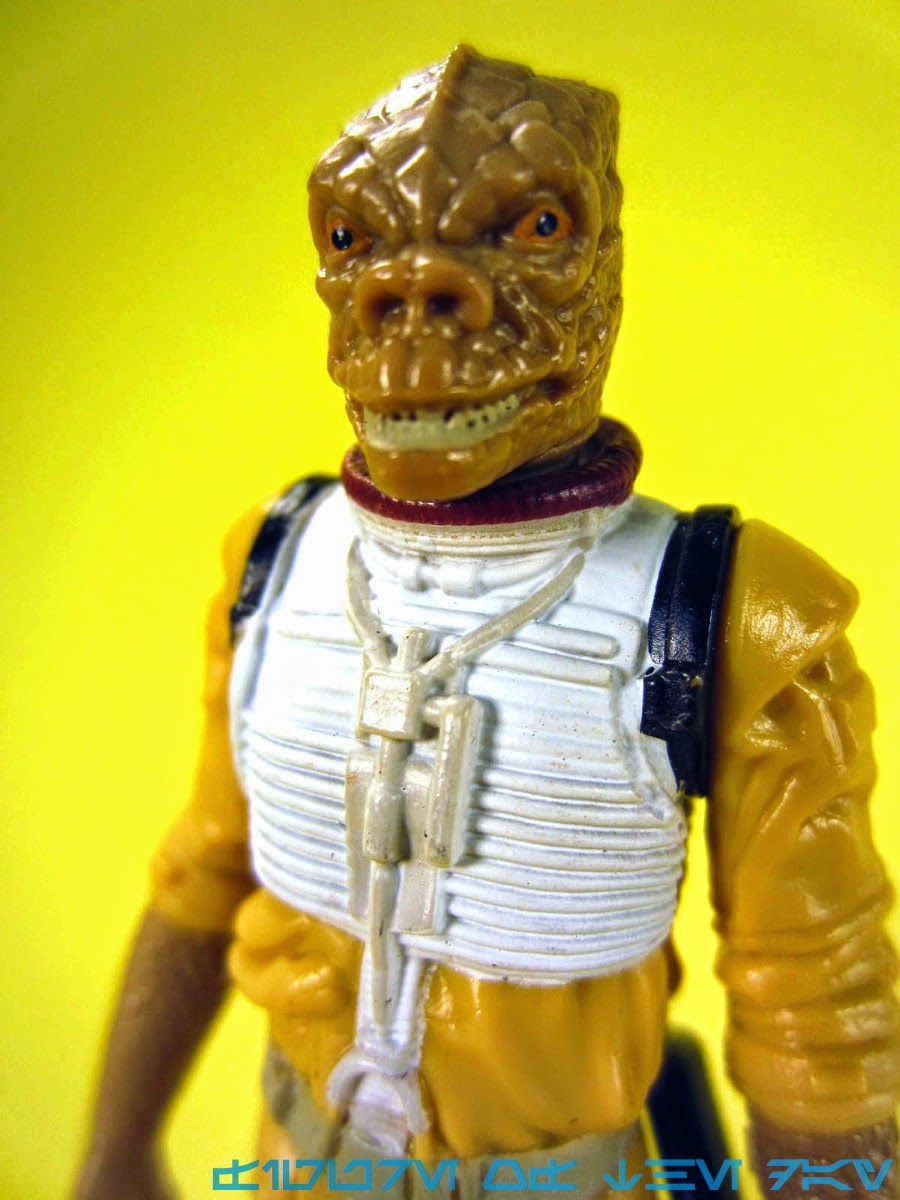 Bio: Two of the most feared bounty hunters in the galaxy, Bossk and IG-88 are hired by Darth Vader to track down the Millennium Falcon and its Rebel crew. (Taken from the figure's packaging.)

Commentary: When you do a line of Star Wars toys, you're going to get a Bossk eventually.  Jakks is working on a 20-inch one, the Titanium Series line made a figure, and the 3 3/4-inch line gave us one every few years.  He even appeared in The Clone Wars, giving the character increased prominence and along with his companion IG-88, he's more or less expected in any Star Wars toy line that lasts more than two years.  Except Bend-Ems.  Nobody likes Bend-Ems. 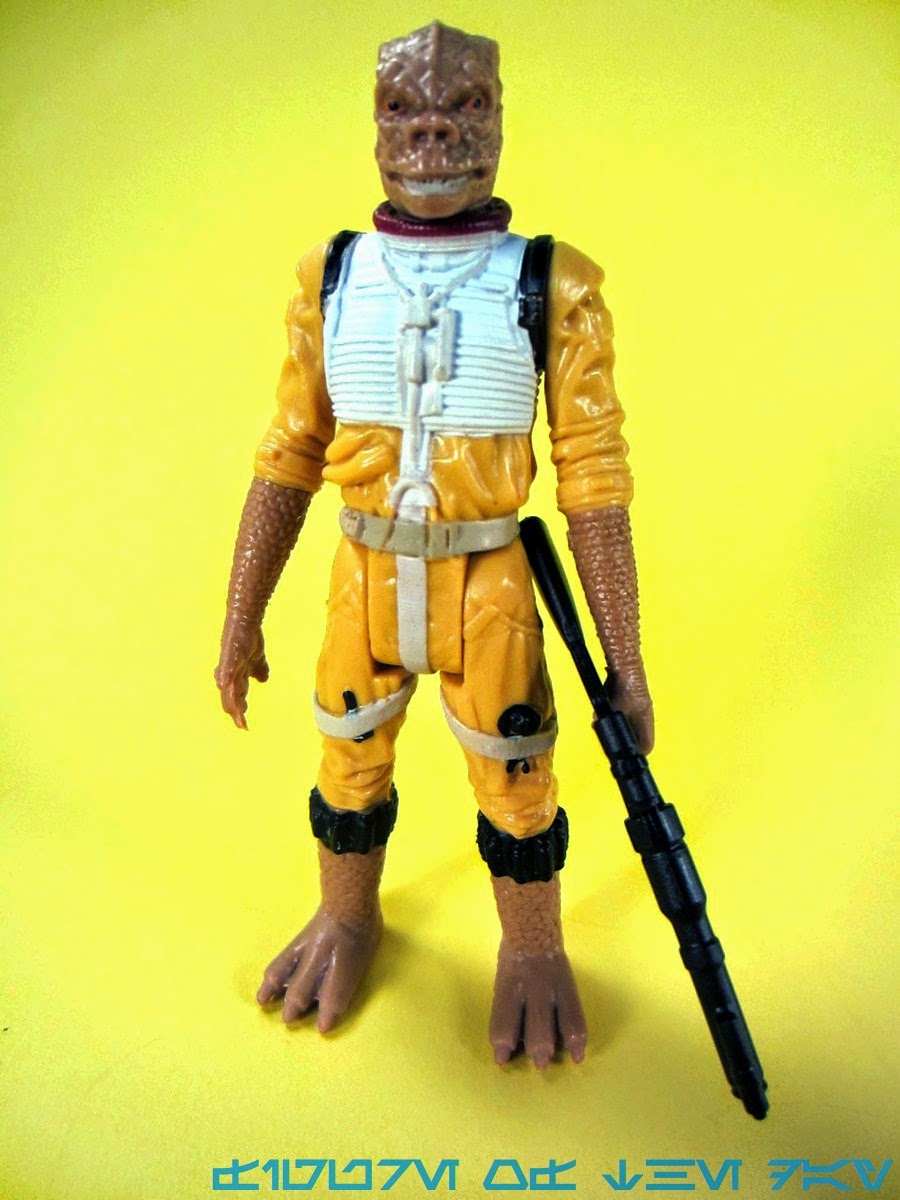 The figure is, evolutionarily speaking, a bizarre turnaround. The sculpting is as good as it has ever been, but he does feel a little short.  He has a wonderfully Beavis-esque underbite and curled smile, acute eyes, and tiny, sharp, painted white teeth.  They did a nice job here.  The flight suit is yellow with a few painted highlights, but some of the deco marks like the patches on the sleeves and the silver on the leg bandoliers are sadly gone.  His claws are now unpainted for the first time in the modern line, and a few silver bits and pieces are ignored.  It's a shame that the sculpt is so nice and the deco isn't as good as the 1997 release, but that's where things are trending things to costs going up and the need to deliver more value at a lower price.   It's unfortunate to think that it was just 2010 when we could get a $8 Bossk with 14 points of articulation and a box of bonus guns, but such is life.  This particular blaster is a new sculpt, and can be held by the trigger guard or by the second grip like the original Kenner figure.  It's a nice touch, I like having options. 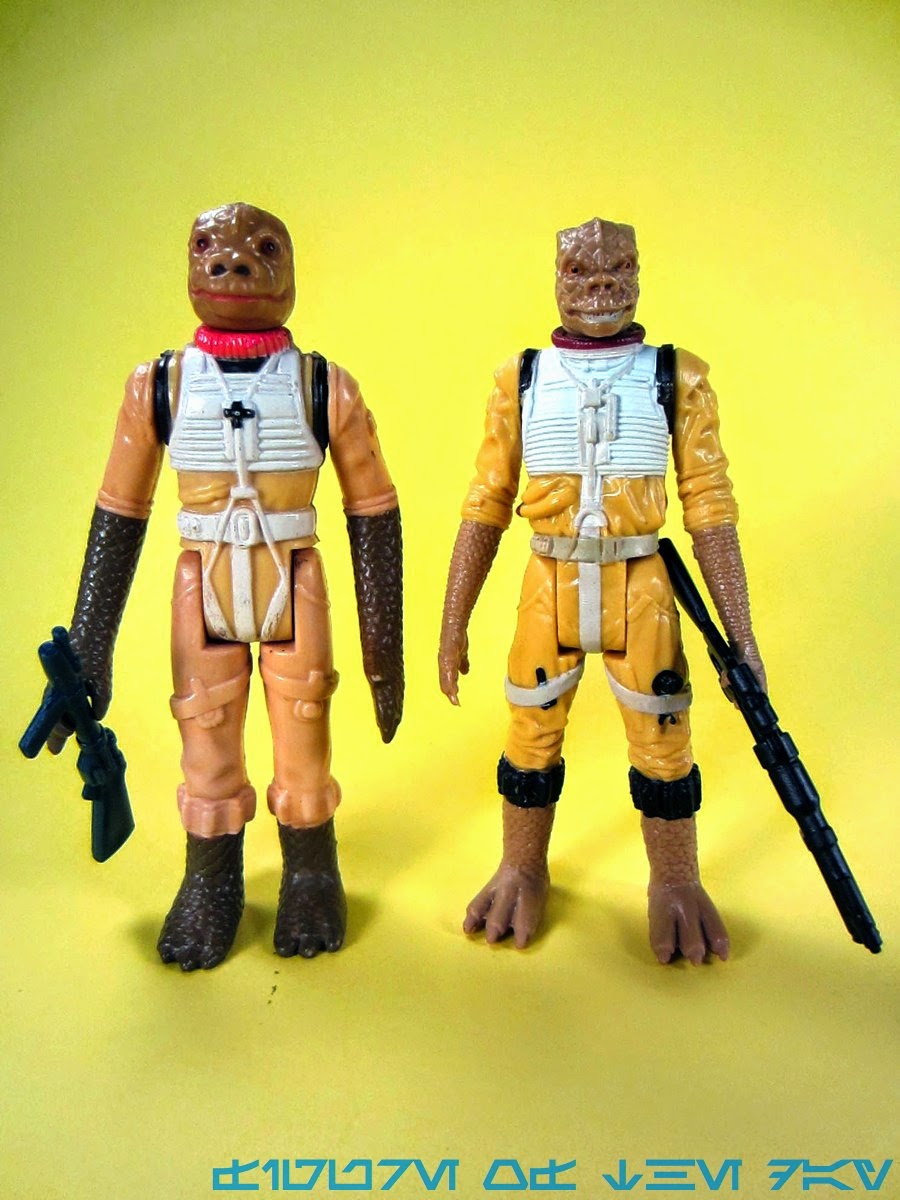 Taken on his own merits, Bossk is quite good.  He's able to stand and hold his gun in his left hand with no problems, and the sleeves are delightfully bunched up just as you might want. The simplified rifle is closer to the vintage Kenner counterpart, lacking the strap, and he has zero problems sitting down.  (This is a huge plus.) The bottoms of his feet are sculpted with segments in his toes and detail in the claws, plus the scales are all just fantastic. With the mostly closed mouth it seems closer to the movie too, so this is probably the Bossk I'll keep within reach to futz with since he stands well, holds his gun easily, and probably won't show a lot of wear and tear.  You don't need it, but if you've bought into the idea that these figures are fun as I have you may as well cave in and get one.  It is fun.

Collector's Notes: I got this from Entertainment Earth.  Bossk started showing up in stores late in January with more trickling out slowly thanks to the dock worker not-a-strike-but-a-strike that has only just recently ended.