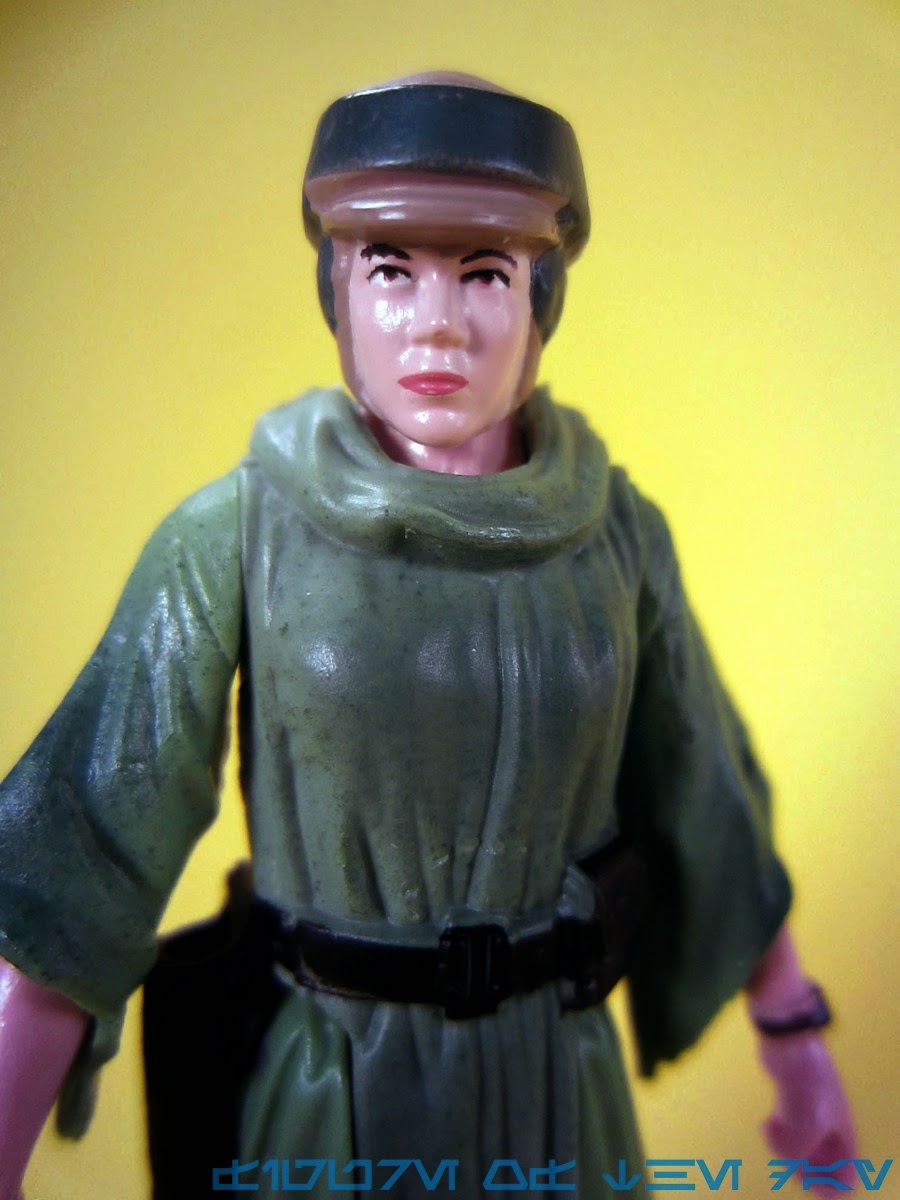 Commentary: Another good one! Princess Leia (Endor) is a lot like the matching Luke.  It's also the first individually carded Leia to be produced since 2012. While Luke was sort of a lateral move in terms of features, Leia is a clear simplification of the original.  Kenner's 1984 figure was impressive for 1984 with a removable helmet, cloth poncho, belt, and blaster all for a couple of bucks.  The new ones manages to look better, but the only accessory you get is the blaster.  You also lose the yellow stripe on her pants, but I'll get to that. 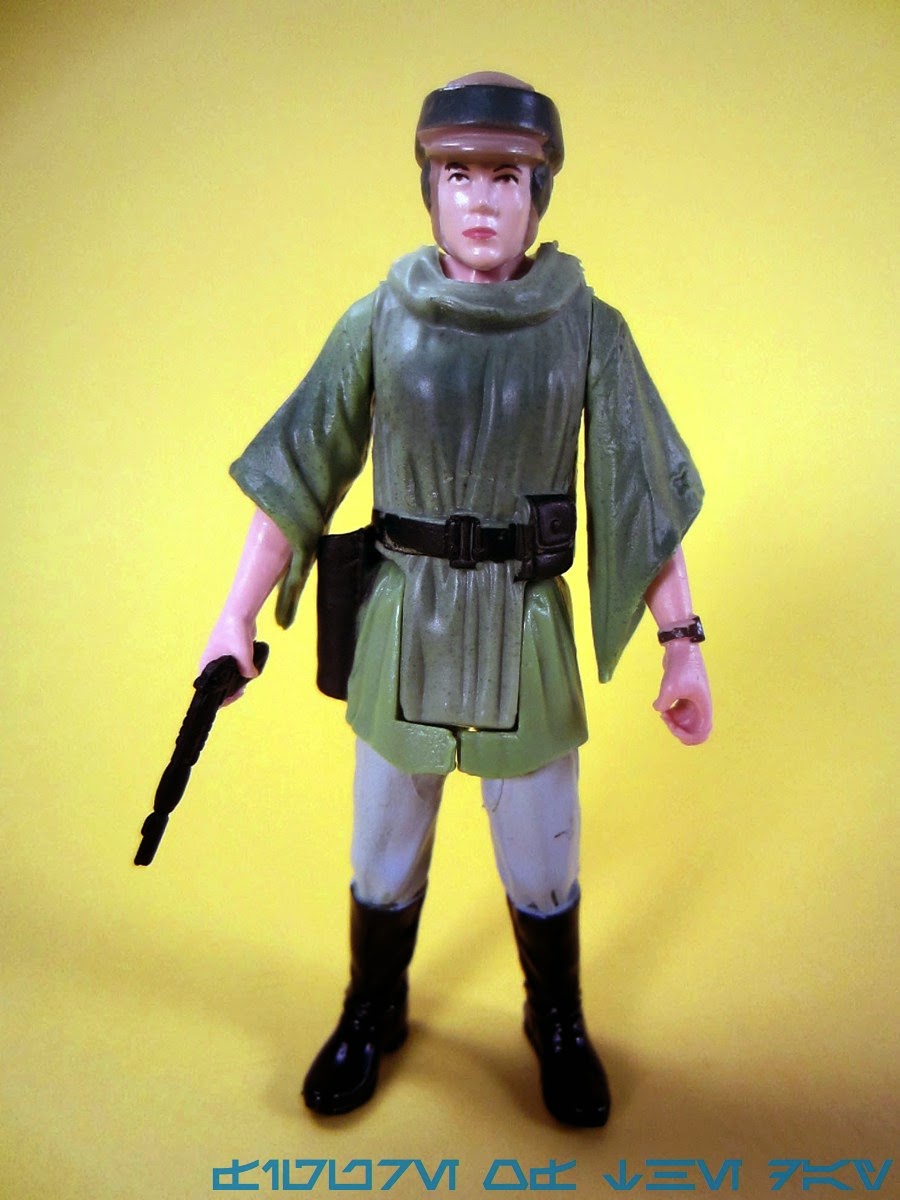 The big cool thing about the original Battle Poncho Princess Leia from 1984 was that it was, effectively, a twofer.  You got Leia in her combat gear, but underneath was a second costume based on how she was dressed during the Rebel Briefing near Sullust as well as the Speeder Bike outfit, which wasn't something that usually happened.  Even Luke was two distinct figures - so Kenner was uncharacteristically generous there.  The modern figures are all over the map, usually being packed with bikes or other accessories until the 2007 Vintage version which, I daresay, isn't as good as this one. 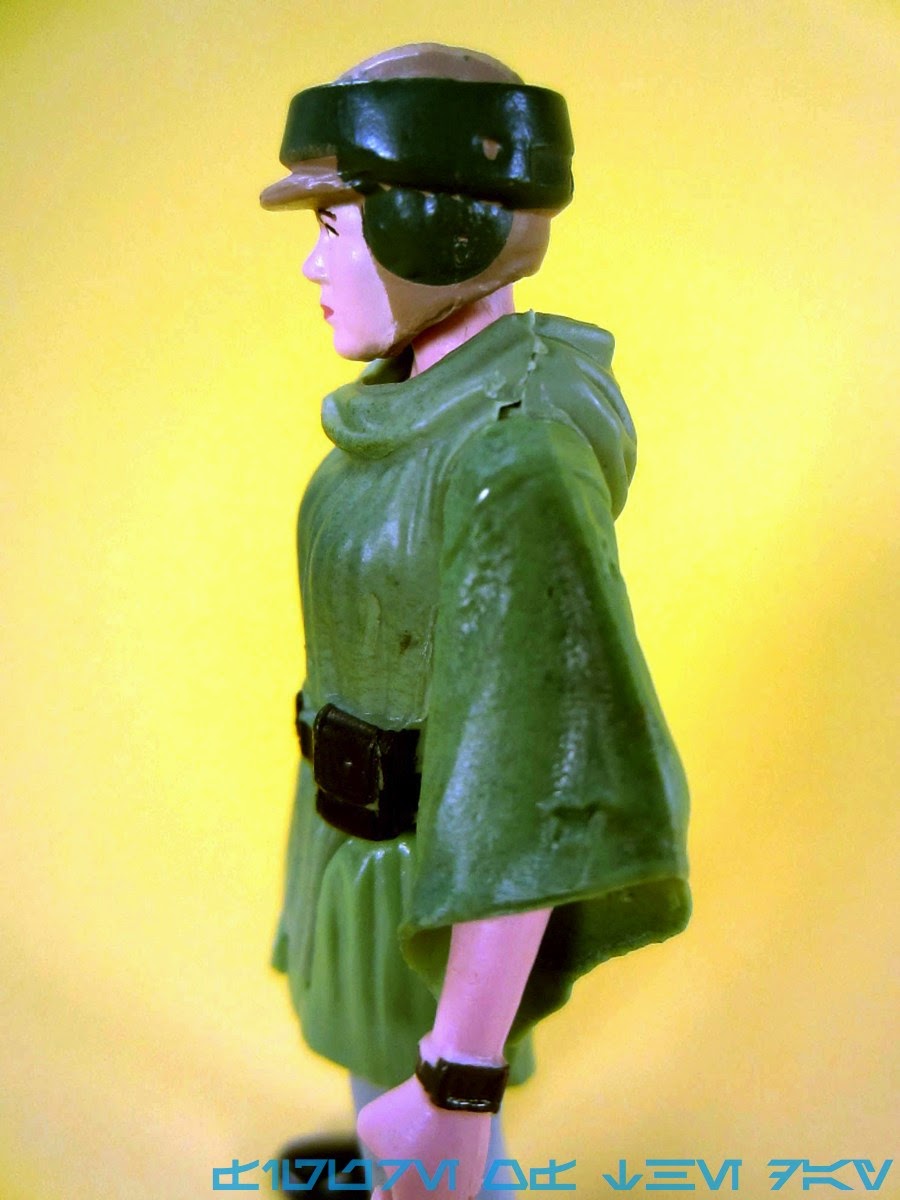 This Leia looks  better - sure, she's missing the yellow stripe on her pants but she has the lighter green poncho color (correct!) and no ugly chin strap on her helmet.  The thing with cloth accessories is that they're hard to do well - the 2007 version was big and bulky and ugly, while this one is bulky but is certainly not ugly.  You can tell she has arms and a body this time.   The sculpt is clean, but not too clean - there are some folds in the poncho and generally everything looks great. The sleeves were well-designed too and I would say that Luke's look  better, but hers look better when she's aiming her gun or pointing. 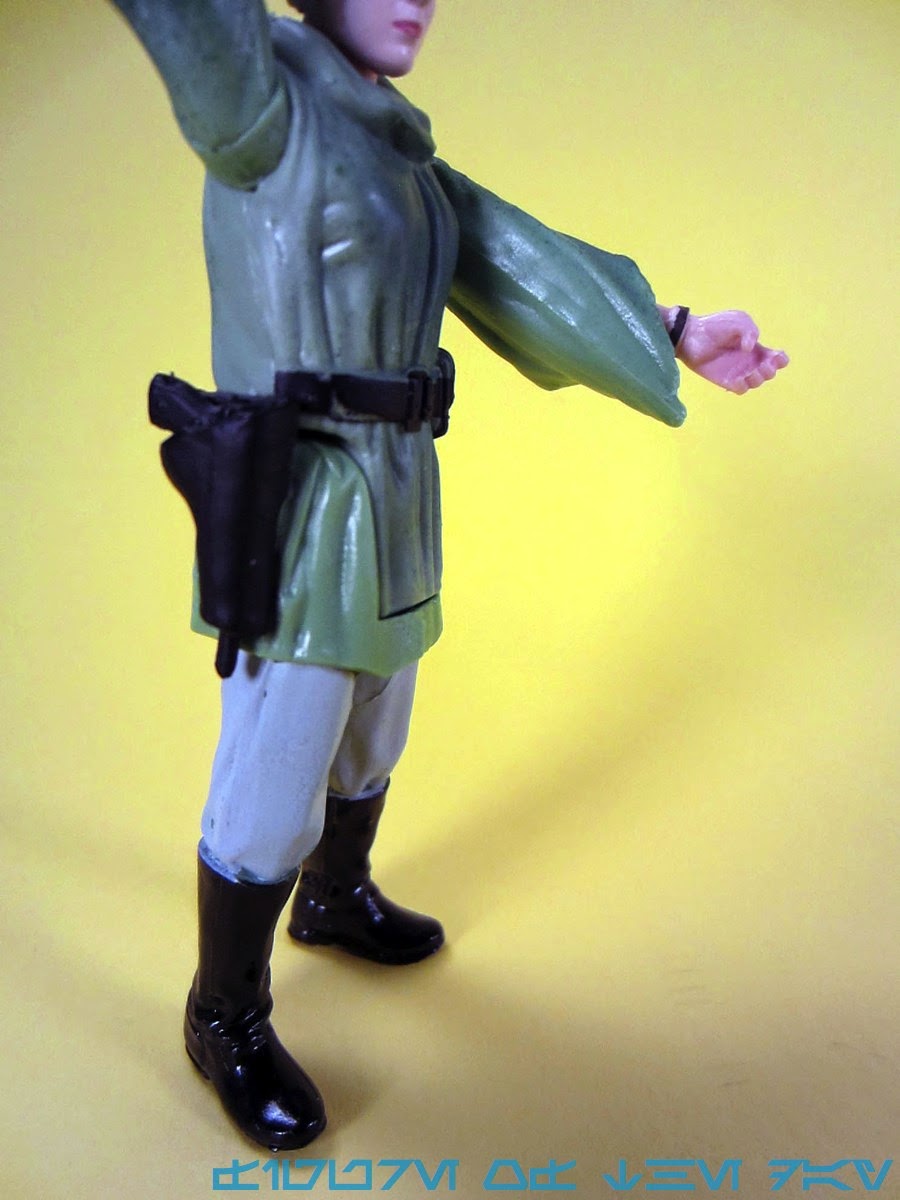 Deco is good - not too much make-up, the eyes are clean, and the green is good on the poncho.  Everything seems to be in place on my samples and while I was going to lament the loss of the silver damage marks on the helmet I found myself not caring.  Instead, I ran into my back storage room and pulled out my Endor Bunker from 1997, placing these figures around it and having a good time.  I forgot how nice it was to have Star Wars figures that stand up without having to kick an ankle out at a weird angle, or use a display stand.  Her blaster fits in her holster, but it is a little loose - so be careful when transporting her around.

Since she can still sit on an old Kenner-style Speeder Bike, I declare this figure to be a victory.  Well done, Hasbro - this entire wave of Endor figures certainly makes me happy and I'm really hoping to see you guys go back and redo classic 1977 Luke, Gamorrean Guards, Yak Face, Greedo, and whatever other 1980s classics you feel inspired to make.  I do not feel let down one bit by this one. 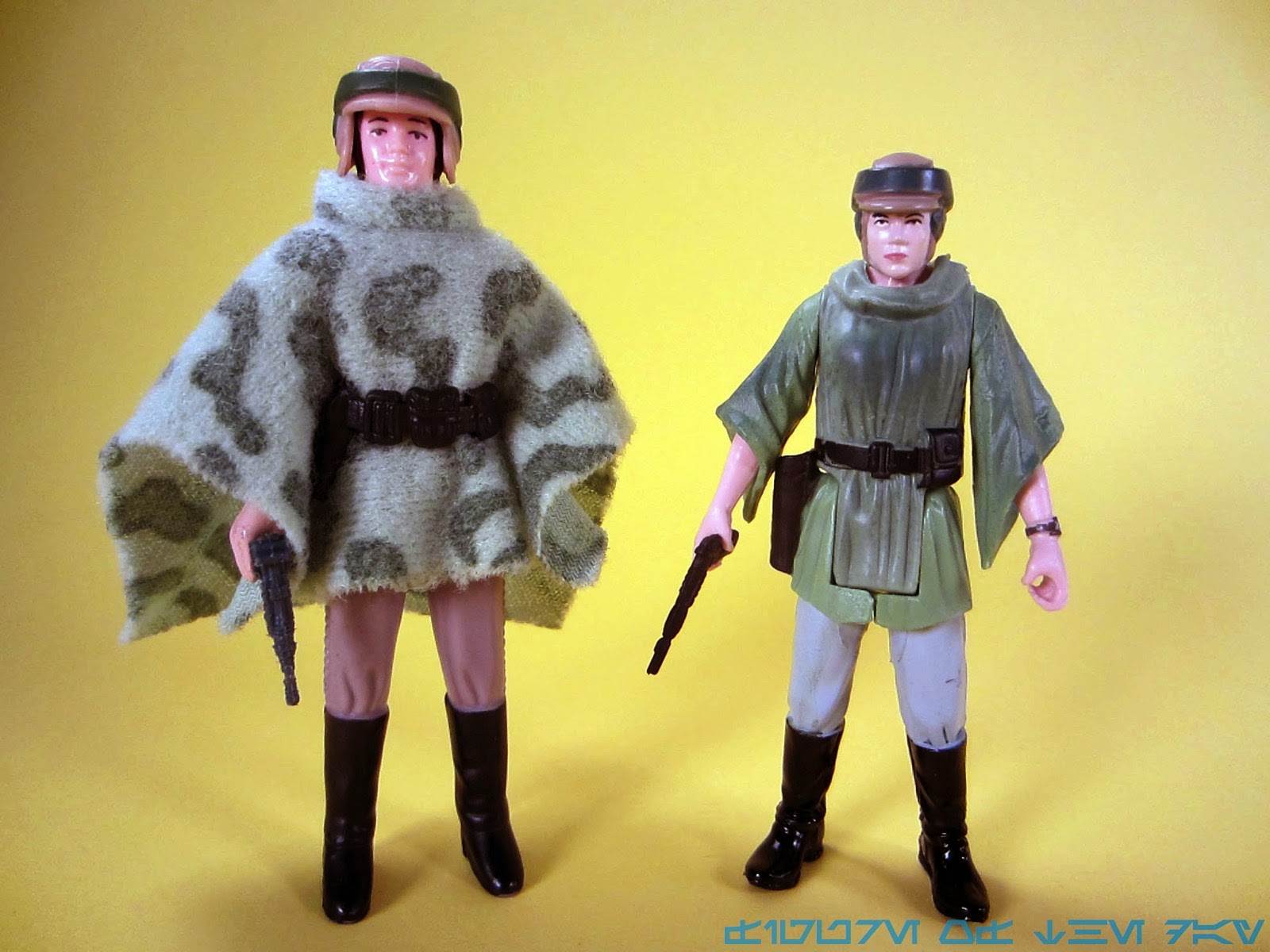