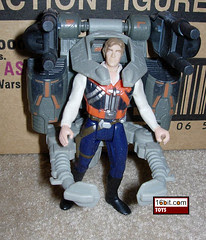 Bio: Han Solo was a cocky Corellian with a wry wit, dry humor, a reckless disposition, and technological savvy, who began his career as a smuggler circa 10 BBY. He went through several employers, had a short military career, met and befriended Chewbacca. He was the captain of the Millennium Falcon and upset enough sentients to have several bounties placed on his head before being swept up into the Galactic Civil War against his wishes. (Stolen from Wookieepedia.)

Commentary: In 1996, for Kenner, Batman was king-- so it made sense to try some of those Batman-friendly tactics on Star Wars. This thinking got us Han Solo with Smuggler Flight Pack, a well-conceived but ill-developed concept. The idea from Kenner was simple: Han would have to do stuff in space around the Millennium Falcon, and he'd have to have something to help him get around. This is very sensible-- but the end result, not so much. Let's start with the basics-- in space, you need something to help you breathe. You need something to help you survive the vacuum of space. And you need something that's a little sensible-- the claw on the bottom doesn't make a whole lot of sense, and the flip-out guns are baffling. Oh, and they don't work too well-- they tend to pop out on their own a lot. The deco is good, though, so Kenner's colorists did a fine job. The problem is that the accessory doesn't make a lot of sense for its stated function. Batman's crazy scuba gear makes sense on some level because it helps Batman swim, or whatever. I don't get how this helps Han smuggle anything.

The figure itself is essentially a retooled & revised 1995 Han Solo. His torso has some oddball harness, his head is cast in this freakish, semi-translucent plastic, and he can't stand to save his life. There wasn't a lot nice to say about this figure as a new release, and now that it's 10 years later, this is a figure that I'm almost sorry I own.

Collector's Notes: If you want one, odds are a collector somewhere will be willing to give you one for free. Try asking around, odds are you'll get lucky. There's about zero chance you'll ever see this figure at retail again, as it wasn't exactly welcome the first time around. It seemed to sell fairly well, though, but fan reaction wasn't what you'd call positive. Save your money, kids!