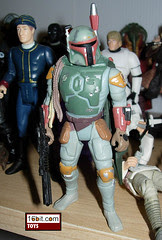 Bio: The most notorious and fearsome bounty hunter in the galaxy is also the most mysterious. Many legends and stories have arisen over the years, but few facts are known of the man called Boba Fett, or his link to Han Solo's past. Since the Clone Wars, Fett has worked as a mercenary, a soldier, a personal guard, an assassin, and most frequently, as the most expensive bounty hunter in the known systems. (It goes on for like another eight pages. Taken from the figure's cardback.)

Commentary: The rumors started in early 1995, and by December, Kenner gave the world the first new Boba Fett action figure in years. While it looks hokey today, let me tell you, it was something special. Painted battle-damage markings, a sculpted cape, a rangefinder that stood up, sculpted Wookiee scalps, these were all things we've never seen on a 3 3/4-inch figure of Boba Fett before. So sure, he was beefy, sure, his torso was too big, and sure, he was based mostly off of the "Proto Fett" designed armor from 1978 or so, but dammit, we loved it. Fans went berserk just trying to find the figure, and when fans started finding out about all the variations, well, you don't need to have me tell you it was chaos. The little squabbles about "wah, I can't find a Scorch" were NOTHING compared to the lunacy that surrounded these figures back in 1995, when everybody and their brother (ESPECIALLY non-fans) would scoop up everything just to sell it back to fans for a profit.

So how does the figure hold up? The once-great figure was awesome for its time, but has since been eclipsed a few times over with newer, better Bobas. Still, he has six points of articulation, he could fit perfectly into the Boba Fett's Slave I vehicle from 1996, and had a superior "T"-shaped slot on his rocket pack (with a "T" on his back) which holds the jetpack in place far better than any recent figure. I'll repeat that so Hasbro can see it: this figure's means of wearing his jetpack is far superior to everything else that has been tried since. It's not like Commander Cody, where when you pick him up, his wee little backpack falls right off and then you can't remember which way is up and which way is down. Nosiree, Boba Fett was designed as a toy, and a darned good one at that. I can't say that you should get one due to newer figures being largely because the sculpt doesn't hold up 10 years later (well, 11 years now) but as a toy? It's totally cool.

Collector's Notes: This is the figure that basically drove variations for several years. The figure has at least three different hand configurations as far as paint goes: a black dot on each, a split circle on each, or one of each. And there's unpainted errors, too. The figure's hand has been remolded over time, with initial releases of the right hand having the fingers molded to the thumbs (like most Transformers), but the fingers were split apart for later releases to allow the easier gripping of accessories. There were also numerous packaging variants, from correcting typos to a green cardback to changing the collection to the sticker and the Freeze Frame, and so on. And with so many errors in there too, well, my advice to you: ignore the variants. Unless you want to make a hobby solely out of collecting every minor change on this one figure, and before you laugh, you'd be surprised how many people did exactly that from 1995-1998.

i happen to have a split-circle fett. picked it up in a big figure lot for cheap recenly. jealous? didn't think so.

i finally got tired and glued cody's jetpack on.