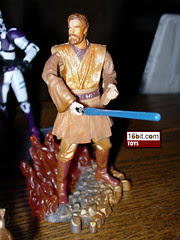 Bio: Obi-Wan Kenobi obeyed his Jedi Master's dying wish and trained Anakin Skywalker in the ways of the Force. Now he is pitted against his former Padawan in a lightsaber duel of epic proportions! (Taken from the figure's cardback.)

Commentary: In the Spring of 2005, Target had tremendous success with a direct-mail campaign advertising the first-ever exclusive Lava Reflection action figure with Darth Vader. They decided to try it again in the Fall, without the campaign, and the resulting figures of Darth Vader (Anakin, really) and Obi-Wan Kenobi proved a little baffling. Why do these things cost $13? Why don't they have as many accessories as the non-lava versions? We never really got an answer, but the fan interest in $12.99 figures has dropped-- a fourth "flame-covered" figure, General Grievous, would come out in 2006 and prove fans really aren't in the mood for this kind of pricing.

Obi-Wan offers nothing new but a display base (previously packaged with the Mustafarian figure) and new deco, and the deco is kind of nasty. Lots of orange, red, and dirty colors make it look like the Jedi General has just gone through Hell during his duel with his former friend, and as such, it works-- for what it is, it's a very nice concept, but for how it was sold, not so much. The sculpt is good, but a better Obi-Wan Kenobi sculpt was introduced around the same time and was sold as a "pilot" figure for about five bucks. With Obi-Wan (Lava Reflection), what you see is basically what you get. The weapon is not removable from his hand, but the hand with the weapon is removable from the figure.

Collector's Notes: When this came out in 2005, I bought it on the spot at full price. It stayed in the package because I really didn't feel like cracking it open until I got a second one, at the time not yet knowing how rare (or common) it would be. I didn't get the one you see in the picture until November of 2006, when I stumbled in a Target in LA that I hit on a regular basis and saw it for about $1.60. It just goes to prove that if you don't like the price of something, waiting just might pay off.