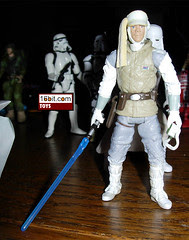 Bio: Though he lacks little formal training in the Force, Luke's natural talent keeps him alive in the brutally cold wilds of Hoth. His strength helps him recuperate quickly enough to lead the snowspeeder counterattack against the oncoming strength of the Empire. (Taken from the figure's cardback. Yes, it really says "lacks little formal training.")

Commentary: Initially, fans said "oh, a rehash of the 2004 figure." Time went by, and they said "oh, this has new snow and no scar." It turns out Hasbro really did a lot more work than just that on this new Luke Skywalker, as the uniform saw some colorful changes. Before, the pants and shoulders were more of a tan color. This picture shows them to be grey on the new release. So which is correct? Well, this new Tins release is closer in color to Gentle Giant's Bust-Ups micro bust model kit, and seems to be closer to some of the photography. WIth lighting as it is, sometimes the tan looks a lot like the grey, and it's hard to tell which, if either, is right.

So, how about the figure? Luke's good, but not great. The sculpted scar is still visible, and the goggle accessory is pretty lame out of context-- he can carry them, but not wear them. They're also too big for his face and head. The lightsaber is incorrect, as the actual handle part is Darth Vader's-- the 2004 Luke release had one that was unquestionably Luke's, the black "cap" where the blade comes out is the telling sign that what you really have is likely the Dark Lord of the Sith's weapon. The figure has a costume loaded with texture, and the quasi-ball-joints at the neck and shoulders really help the figure's overall fun factor. Unfortunately, the figure was designed for a specific purpose and out of that context, he's a little funky. In 2004, this figure had an ice base that connected to an ice base with a Wampa figure, and Luke could hang upside-down as he waited to be eaten. (It's really awesome.) Out of this play pattern, the figure just seems to be a good, but oddly articulated, version of Commander Skywalker from Hoth. There's nothing wrong with the sculpt in and of itself, but I have little doubt fans would have rather had a super-articulated one that could ride a Tauntaun, walk around a Rebel base, or hang upside-down.

Collector's Notes: This is the second release of this mold, the first being in the 2004 Saga line. This one is arguably more authentic, and the bloody scar isn't quite the eyesore as it was on the original. It's still a great figure either way. Since there has been absolutely zero discussion over "tan pants vs. grey pants" on Hoth Luke over the years, which one is more correct is pretty much inconsequential. If you like the idea of a Wampa Cave set-up, the first release is the one to get. If you want to get the cool Snowtrooper with the removable helmet, well, this release is the one you'll want. And if you're like me, you just buy both and let that be that.

Email ThisBlogThis!Share to TwitterShare to FacebookShare to Pinterest
Labels: Luke Skywalker, TAC, The Empire Strikes Back