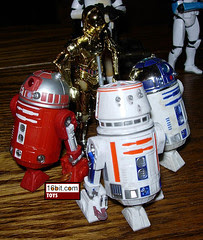 Bio: Just as Owen Lars purchases this battle-worn astromech droid, the droid's motivator blows a fuse. Disgruntled and dissatisfied, Owen asks for another R2 unit and selects R2-D2 after C-3PO recommends his services. Little does Owen know that his seemingly simple droid selection will turn out to determine the fate of the galaxy... (Taken from the figure's cardback.)

Commentary: For fans of the movie, he is "the red one." To some of the comic fans out there, he's "Skippy, the Jedi Droid." To most of you, he's R5-D4, the second-ever Astromech to see a toy back in 1979, and the only Astromech droid that wasn't R2-D2 until 1999. In 1996, Hasbro (then Kenner) made a weird rocket-firing version of this droid with shoulder cannons, and most fans bought it-- but weren't sure why. The demand still existed for a new version of the droid, and 10 years later, Hasbro delivered-- and he's selling very well in most markets.

Based on the 2004 Vintage Original Trilogy Collection R2-D2 sculpt, R5-D4 glues down the tool panel and adds a retooled head. When his head turns, his motivator pops out. It's pretty simple, but a fun play feature and probably the only movie-based one this figure should have. The size is right, the deco is wonderful, and the dirt and grit look stunning on this figure. This is the perfect R5-D4, and I can say that with very little doubt that Hasbro will never make a better one until the line gets yet another reboot in, let's say, 30 years.

Collector's Notes: This droid was very popular and tended to sell quickly, although it's not impossible to find one. If you want one, you best go out and get one now. A black repaint, R5-J2, hit stores last week.