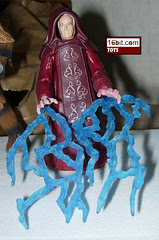 Bio: Supreme Chancellor Palpatine is a powerful leader in the Republic. Now he reveals the frightening truth: he is the Sith Lord Darth Sidious, and his evil plans are about to destroy the Republic and the Jedi. (Taken from the figure's cardback.)

Commentary: Due to the expanded role of Palpatine in the final prequel, Hasbro made a ton of toys based on Emperor Palpatine. There was a basic figure in a black robe, there was a Supreme Chancellor figure, there was this deluxe one, there was a basic saber-swinging one, and by and large kids didn't care. Some of these figures would be repackaged in the future, but this one wasn't-- actually, after initially being a weak seller, it disappeared in many markets and was replaced with other non-selling $10 figures. This one wasn't bad, but it was built around a basic action feature. Push lever, raise arms, switch heads, activate lights. The figure couldn't sit or be posed in any meaningful way, so what you see is what you get. The sculpting is a little below par for the line, as figures since 1998 have had breathtaking detail on their garments-- just take a look at Pote Snitkin if you don't believe me. This particular figure just didn't turn out well. The mechanism is neat, and it's kinda fun to play with, but after the first minute, you'll be ready to toss this one on your shelf.

Collector's Notes: A number of the $10 figures sold poorly in 2005, but kids didn't really like this one in particular. No plans are known to put it on the market again and anyone that pays more than $10 for one is a grade A sucker.