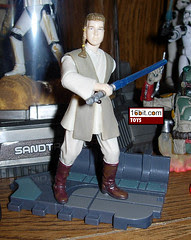 Bio: This ten-year old Padawan is one of the most promising students in the Jedi Temple on Coruscant. The young boy finds himself in the middle of a dark act of betrayal by a trusted member of the Jedi Order. (Taken from the figure's cardback.)

Commentary: Minor character lovers, and fans of cameos, here's one for you. Zett Jukassa was played in the movie by George Lucas' son, and he existed for no reason other than to get shot after killing a bunch of Clones in front of the Jedi Temple. With articulation at the usual places and then some, this multi-jointed wonder can stand around and... well, pose with his lightsaber. The deco is true to the movie, and the look of the figure is close-- he's a little pale, but otherwise looks fairly close to his photograph on the packaging. There aren't many minor human Jedi to get action figures, so this one is pretty special-- obviously, there's a reason he got made, and the figure is cool enough to warrant buying if such things interest you.

In the end he's just a human Jedi, but the backstory in the movie and from behind-the-scenes make this a nifty addition to any collection.

Collector's Notes: The figure was repackaged in 2006 in the Lucas Family Collector Set, but this time around it had no display base. Since the boxed set has 3 unique sculpts currently available nowhere else, the ShopStarWars.com exclusive gift set is probably the best way to get Zett since, well, you probably want the other figures like Blue George Lucas too.