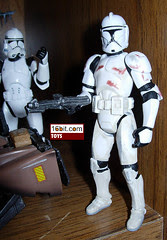 Commentary: In late 2003, Hasbro introduced what was considered to be the definitive Clone Trooper action figure. It was repainted as an exclusive, and considered the top-- until this version came out in 2005, and now there's some debate. This version has slightly refined sculpting and a removable helmet, but no waist articulation. The figure also has some particularly ornate battle damage, and is not as prone to yellowing so far. (Which means it's good.) So, are 13 points of articulation enough? Possibly. Since Clone fans tend to build armies, this is automatically worth adding to your collection just for the sake of variety, but there's more to it. It has a bonus Clone Pilot helmet, so the figure can be a makeshift pilot or a normal Trooper. The dirt/damage deco is very impressive as long as you don't get too close-- you can see the printing patterns if you squint. It's a good figure, and arguably one of the best Clone figures ever... but does the removable helmet matter to you? Or the waist joint? These are things to consider before tracking this down.

Collector's Notes: This is the second release of this mold. The first was in the first Clone Trooper Evolutions pack, and was yellow (a commander). The third release was profiled earlier in this column, and was a blue redeco sold in the 30th Anniversary Tins gift set collection. This white Clone has the strongest overall deco and is also the most generic, making it well worth owning. Since it'll probably cost you $20-$30, it isn't all that bad. The set also includes an Episode III Clone (in "ARC Trooper" deco, according to Hasbro) that can be reconfigured to also be a Coruscant Trooper. The third entry in this Evolutions set was an ultra-filthy Sandtrooper, who can be a Sandtrooper-- or if you have other Troopers, you can switch out the pauldrons and make a custom squad with a little more variety. (I recommend this.)