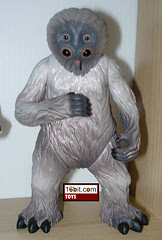 Bio: Muftak was orphaned at Docking Bay 12 of the Mos Eisley spaceport on Tatooine. He grew up among the cantina's regular, local customers, performing odd jobs to make a living. He always knew that he was different from almost every other race that passed through Mos Eisley, but he couldn't learn who or what he was. (Stolen from Wookieepedia.)

Commentary: Back in 1998, Hasbro was still allowed to sell products directly to consumers through its web site, like Muftak here. For a few bucks, you could order him along with Kabe and they'd be sent directly to your door. The larger-than-average figure has six points of articulation, a hefty blaster, and is big and fat and cuddly. (Awww.) The fur sculpt is excellent for its day, and the figure turned out rather nicely especially when compared to the quality of Chewbacca toys that would come both before and after it. This is a really great Cantina alien, and one you should track down. After all, not every figure has metallic fur!

Collector's Notes: These were blown out at stores like Factory 2U and Entertainment Earth for reasons I haven't yet quite understood, meaning there's a fair amount in circulation and they aren't too expensive. Snag one if you see it, or buy Foul Moudama-- all his clothes are removable, and without them he's pretty much the same as Muftak here.