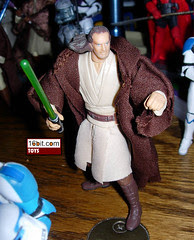 Bio: Having spent his life battling the forces of evil, Qui-Gon Jinn squares off against his most sinister enemy yet - Darth Maul - in an epic lightsaber duel inside the Theed power generator. (Taken from the figure's cardback.)

Image: The tables of Adam Pawlus.

Commentary: After many releases in 1999, Qui-Gon Jinn has seen very few figures since Hasbro went out of their way to purge the memory of Episode I from the shelves. This release was one of the last in Episode I packaging, and six years later, he returns to the stores. The figure has a mere 6 points of articulation (sub-standard for its day), but was one of the first figures to feature "soft goods," cloth parts that accent the figure and enhance it in special ways. In this case, the enhancement was that the figure can sit-- something most Qui-Gon figures cannot easily do. While a nice addition, it's ultimately an empty gesture because the figure's wacky arm pose prevents it from being able to fit in a lot of vehicles, and his hair is all crazy due to the action pose. It's a nice figure to look at, surely, but the decision to include a communications device with the most action-oriented figures of his day continues to confuse me.

For kids, this is a solid figure-- the CommLink (if included) is the only easily lost part. The lightsaber is fairly durable, and with only six points of articulation, the arms or wrists are very unlikely to just pop out of the sockets. So it's an excellent toy, and an excellent part of a diorama if you're setting up a duel with Darth Maul. It doesn't have a lot of articulation, so most collectors will poo-poo this one-- but it's well made and designed with kids and collectors in mind, so despite some limitations I simply cannot fault it.

Collector's Notes: So far, there have been three major releases of this figure. The first included the figure, a CommTech chip, and a comlink. The second came in a Battle Pack, and that one didn't have the CommTech chip. Number three was in the Episode I-themed tin set, which had only a lightsaber and a Jedi cloak. So to get "all the parts" you'll probably need to own at least two of these figures. As far as I can tell, no major changes were made in the figure itself-- just the accessories.