Figure of the Day: Day 230: Stormtrooper 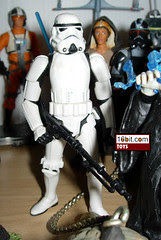 Bio: Bail Organa, a senator from Alderaan, sees how the Republic is being ruined. When the situation becomes even more treacherous for loyal members of the Republic, he lends his support in the fight to save the galaxy. (Taken from the figure's cardback.)

Image: Adam Pawlus' toy shelves. You can barely make out the outline of the blast mark on the figure due to the temperature in the room.

Commentary: What a difference a few years makes. In 1995, fans lauded the then-new version of the classic armored trooper for its articulated neck and waist. In 1999, it was crap. Then, the Stormtrooper you see here would come out, be impossible to find, and cause fans to go mad with troop building envy as few fans saw this in the wild. (The mold would be reused for a slightly different Trooper in the future, but by the next time it was at retail attention spans cooled significantly.) The important thing to remember here is that in 1999, this was awesome. The figure had a holster for its gun-- it didn't work, but it was an important frequently missed detail. Faux ball-joints were placed at the neck and shoulders, and for the first time, a regular Stormtrooper was given knee joints. On top of all this, an entirely new sculpt was made, not based on the beefy design of 1995, making this the go-to sculpt for all new Sandtroopers and other related figures in the years to come. Fans loved it. It wasn't perfect, but damn, it was a really slick figure for its time.

Collector's Notes: Impossibly rare in 1999 and 2000, the figure would make a few returns to availability. The Fan Club offered up 4-packs of the figure with different weapons and no battle damage for about $20 a pack-- a great deal. In 2003, the figure would be recarded in the first-ever "Hall of Fame" assortment, also without battle damage. This same figure would return to stores in 2004 for the Original Trilogy Collection and would find itself repacked in two Battle Packs in 2005. The only release with Battle Damage, though, would be the original 1999 CommTech release. Upon the "Vintage" Stormtrooper's release in 2004, collectors immediately soured on this sculpt, although it continues to sell well when released to retail.