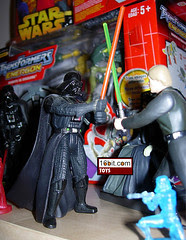 Bio: Under the evil gaze of Emperor Palpatine, the lightsabers of two Jedi Knights - a father and son - clash furiously in a final duel between the light side and dark side of the Force. Slowly, the young Skywalker is lured closer to the rage of the dark side, and Palpatine sits confident of the Rebellion's defeat and the acquisition of a new emissary to fulfill his evil legacy! But the young Jedi's resistance appears to be growing... (Taken from the figure's box.)

Commentary: It wasn't too hard to please fans with new, improved figures back in 1998. This Darth Vader was one of the first with the "skirt" or "kama" or whatever you want to call it, this inner chunk of robes was an added detail that very few previous toys and collectibles ever bothered to replicate. Today, fans take for granted a super-perfect true-to-the-prop replica of an item, what with their fancy Gentle Giant scanned busts and all, but in 1998 a figure like this-- which was still far from accurate-- was pretty exciting stuff. Even though he only had six points of articulation, and his skirt kept him from sitting, the figure had some exciting details for the first time. The chest armor had some gunmetal grey/silver highlights, and the sculpting and deco was crisper than on most previous versions of the figure. Today, the figure is just merely old, replaced but numerous, far better versions of the Sith Lord with better articulation, truer-to-the-movie sculpting, and even cloth capes. This figure was not treated well by time, but this is, in part, Hasbro's fault. The Final Jedi Duel Darth Vader was roughly the third Darth Vader figure in the modern line, and today, we're scratching decent double digits-- so last year's model gets dated pretty quick.

Collector's Notes: 1998 also saw the release of the Removable Helmet Darth Vader, which was a million times better. Still, the Final Jedi Duel Darth Vader would come back as a silver figure in 2002 (Toy Fair and Fan Club exclusive) as well as in 2005 as the now infamous Target exclusive Lava Reflection Darth Vader. The Final Jedi Duel set is pretty cheap, though, and is still worth getting for the Emperor and his throne and display base.