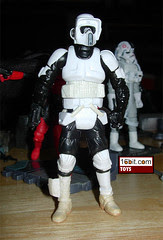 Bio: A scout trooper was an Imperial stormtrooper that had been specially trained for scouting and reconnaissance. (Stolen from Wookieepedia.)

Commentary: Reactions to the 2004 "Vintage" figures were mostly positive, but in 2006, fans were a little less mirthful. The Biker Scout (or Scout Trooper to non-vintage people) was the best received, and early photos made him look a little chunky. Due to the amount of articulation, which allows for a little more subtlety in the poses, the figure is loaded with personality. You can make him look confused, curious, and downright mean depending on how you position him and his 14 points of articulation. The sculpt refines the previous Power of the Jedi figure to a great extent, adding new details right in the plastic, which are fleshed out with a new level of paint decoration. The "cloth" midsection was colored in an off-white color, setting it apart from the hard plastic armor bits. (Of course on the toy, it's all plastic.) This may be the best new sculpt of 2006 according to most fans, because it seems after years of questionable Scouts (or none at all), Hasbro finally nailed it.

Collector's Notes: In Spring 2006, Hasbro shipped this figure on a retro-Return of the Jedi cardback. In the Fall of 2006, the same basic figure shipped as part of a gift set in a tin, but had a resculpted head with a flip-up helmet. Both are quite popular. Fans have been demanding more of this figure, and even the frighteningly high price point of $10-$13 wasn't enough to keep army builders away-- and fans still want more!

More versions of the Scout exist in the modern line. In 1996, one was packaged with a Speeder Bike, and this one had articulated knees, a unique neck joint, and a strange pose. In 2000, one was made for Power of the Jedi, and three major versions exist: one is clean, and one is battle-damaged. The third was sold in 2002 as a Target Exclusive Accessory Pack, and you can tell this one because it's quite literally ass-backwards-- a factory error resulted in the lower torso piece being assembled incorrectly. This same sculpt was resculpted to have a flip-up helmet and was sold with the AT-AT in 2006. And finally, another version was released as a "Battlefront Exclusive" with a unique rifle, but as the gun is available elsewhere, we don't consider it a truly different figure. So if you want one of every major Scout Trooper release in the modern line, you'll need at least 7, 8 if you count Battlefront.

Email ThisBlogThis!Share to TwitterShare to FacebookShare to Pinterest
Labels: Empire, Return of the Jedi, Vintage TSC