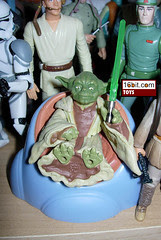 Bio: Well into his 800s, Yoda is the oldest member of the Jedi High Council, as well as its most deply perceptive Master. A great traveler in his younger years, Yoda has quietly visited hundreds of worlds on his own, spending years learning different lifeways and appreciating the infinitiely variable nuances of the Force. His experiences have made him cautious and reflective. (Taken from the figure's cardback.)

Commentary: Yes, another Yoda, as there are many of them. This is a figure that was released for Episode II, based on a sculpting for Episode I, most likely as a result of Hasbro needing to whip up some quickie new product at the end of 2002 due to high demand for the action figure line. Is it good? Well, yes and no. The original figure was fairly well done, except it didn't offer a lot in the way of accessories, and the decoration was weird. This redeco makes the figure look a little better, adds a magnet to his hand, and packs in a bonus lightsaber. Since the Yoda of Episode I (or more specifically, its press shots) was a smiling puppet, this figure looks a little out of place when you look at the all-CG and slightly more serious looking Yoda of the Clones. The texture of the sculpt is good, the overall look of the figure is good, but it isn't great. After all, it's a figure from 1999, and Yoda toys have improved significantly since the world saw him jump about and fight with a lightsaber.

Collector's Notes: This was a fairly easy to find figure, but also quite popular with kids and new collectors. After all, everybody loves Yoda. Since there are so many Yoda figures, and Hasbro keeps cranking out the new (and old) ones repeatedly, this is a fairly cheap figure on the secondary market, and that's assuming you want to track it down at all. Since he has a magnetic hand and metal lightsaber hilt, he's fun to play with. (Actually, I think he's the only Yoda with a magnetic hand.) As such, he's a lot of fun, and the Jedi Council chair is a nice touch. However, if you have the Episode I Yoda, this figure has little to offer beyond cosmetic changes and, of course, the magnetic hand and weapon.