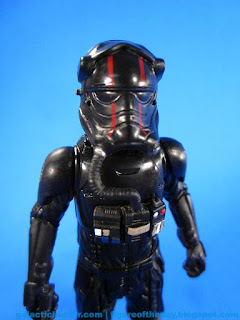 Bio: The elite of the First Order starfighter pilots have access to specialized craft, such as the two-seater TIE craft outfitted with enhanced weapons and sensor systems. (Taken from the figure's packaging.) 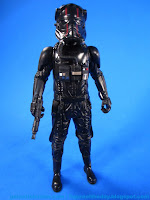 Commentary:  Your reason for buying the pricey First Order TIE Fighter Pilot Elite is basically red stripes - or the TIE Fighter he comes with, which has a generous dusting of desert sand on the ship.   The figure itself is very similar to the carded TIE Pilot, but is almost exactly the same as the pack-in removable helmet TIE Pilot from the regular First Order TIE Fighter vehicle.  I like the idea, but I am certainly feeling a bit of a drag on my momentum as we get too much, too soon.   A $40 vehicle followed by a $43 repaint in weeks is a bit much, and we know Assault Walker and X-Wing deco variants are coming too. 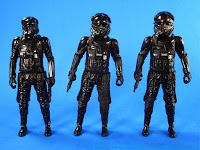 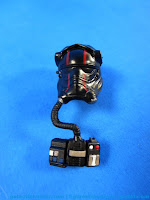 The pack-in Elite Pilot with red stripe has arms that bow out slightly, just like the non-elite pack-in Pilot.   He has 5 points of articulation, a wonderfully painted array of lights and switches on his chest, and is largely just black.  Sure, you've got First Order markings on his shoulder but other than that he's about as black as they get.   The figure inside is white, though, so it doesn't appear to be a specific character as of yet.   The suit and boots and gloves are basically the same as the normal version, but red "ace stripes" or some such are what sets this figure apart.  You may be asking "So is this figure really worth $43?" and the answer is an emphatic no - but if you don't have the normal TIE Fighter, this one is more interesting to look at.  As an either/or scenario, you can always get a helmeted plain pilot on a single card relatively cheaply - there are no options for the red ones yet. 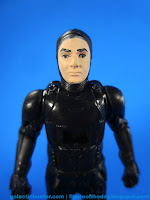 I wouldn't call this figure different enough to make you mad, but it is samey enough to make you consider your purchases carefully.   Unless you're all-in for vehicle and figure variants, you probably don't need to spend $85 on two barely different TIE Fighters this year.  Hasbro has been reluctant to give actual "battle damage" of any kind to its TIE fleet since the early 1980s, so there are still no blaster marks or meteor impacts - just dirt.   I know completism is a big part of our toy religion for many of us, but man, space is becoming an issue - and a 6-inch scale TIE without the dirt markings should be here any day now.   So get the dusty version first, if you're interested in such things - the Elite Pilot sure does look nifty.   I'm not sure I'll be thrilled to shell out $50 or more for variant pilots down the road, though, as it becomes increasingly apparent that Hasbro seems to not want to release any vehicle without an action figure now.

Collector's Notes: I got mine from Toys R Us on a retail shelf last week.