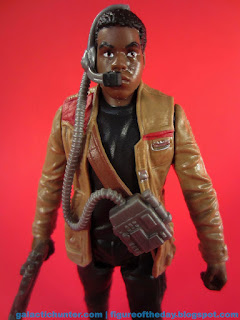 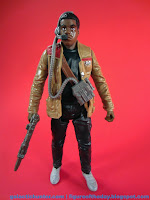 Commentary:  So far I've got four Finn 3 3/4-inch figures, 3 of which are pretty much the same   Each mold is a tiny bit different - this one is visually more distinctive thanks to the remolded head and jacket.   So far you'll only find this one in the Millennium Falcon, and the return of "headset" figures with the vehicle is a nice nod to the giant Millennium Falcon which, of course, this is not.  The new vehicle is basically the same size as the 1978 original, as well as its 1995 and 2004 descendants (and their repacks).

The sculpt is very similar to the single carded figure - the plastic is a little different and at first glance, I thought he might be shorter.  He's not.  The legs are closer together, his jacket no longer has a hole, and the head is - of course - a new sculpt with the headset.  The headset clamps on to a new strap on his jacket, which is charmingly retro - after all, The Clone Wars showed us tiny cell phone-sized communicators built in the trooper armor.  This is a big, 1970s-style headset which, I assume, is part of some proprietary internal communicator for the Falcon and Han was too cheap to upgrade it.   It's a little loose, but it does clip on the strap without too much of a fuss - just be careful with it.  Finn has no problems fitting in the driver's seat of the Falcon, and pretty much everybody plops in the gunner's station easily. 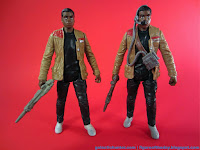 The head sculpt and general look and feel of the figure is basically the classic "just different enough to make you mad."  If you already own Finn, the minor changes are irritating - and if you don't, it's a fine replacement.  The gun is now a different color, and the pose is different - but the costume isn't.   Vehicle fans will be delighted that he's different, all-in figure collectors will be irritated he's not more different, and right now I'm just hoping he's my new favorite character since I have so many of him before seeing the movie.  I hope the next Finn I see is, at least, in Stormtrooper armor or has a new hat.