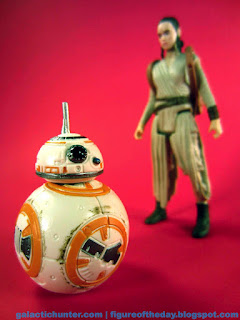 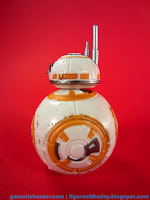 Commentary:  For some reason, Hasbro hasn't gone out of their way to sell you BB-8 droid toys.   This one is dirty, and packed with the Millennium Falcon.  As I write this I don't yet have the one with Unkar's Thug and the Desert Scavenger, but it looks like that one is the same mold without the scuffing.   I love options - so you've got your choice here.  It's also a pretty shrewd move for Hasbro to take something small and desirable, and pack it with things people probably wouldn't ordinarily buy.  Well, on paper anyway, you know and I know that in-store theft is pretty common when it comes to these situations - so check the box before you leave the store.

Sculpting is, unsurprisingly, great.   Having not seen the final film, I can only say it looks pretty consistent with the images we've been shown thus far and therefore meets my low standards of approval.  We see grooves, panels, and vents.  The figure design also reminds me of comments I made last year in that a "Black Series" and a "Cheap Series" figure would likely be identical - all you have here is a flat base with a foot peg hole, and an articulated neck.  That's it.  There's no magnets or rolling mechanism, fundamentally making this similar to the 6-inch version minus the foot peg hole.   I think this was a smart move too, because he plugs right in to the Millennium Falcon or sits nicely on any shelf you may have without a fight.  There are currently no "droid sockets" made for BB-8, but he fits some vehicles adequately.   He's portly - so he won't fit in the "Vintage" Y-Wing, and he barely fits in the various X-Wings.  He sits above the Y-Wing Scout socket pretty nicely since it's narrow, so he does have limited astromech interactivity despite the smaller size. 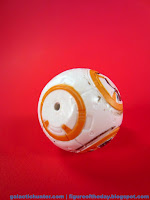 The base is flat, so he can stand around just fine - or plug him in to a vehicle's foot pegs.   With only one moving part - a head that can rotate or move a tiny bit - they manage to squeeze a fair amount of personality in this guy.  He's got a big black eye, some orange detailing, and a whole mess of dirt and mud - there's a tremendous amount of scuffing detail work around the droid's body.  His head is fairly clean, but not devoid of detail - there's a silver antenna and other bits and pieces with some painted bits.  What those pieces are, we don't know yet - holographic projectors?  Sensors?   USB drives?  No idea.

It doesn't do much, and when you get right down to it this is a highly desirable accessory.   Action figures with only one point of articulation are quite uncommon, but had Hasbro packaged this with a gun or gizmo for another figure and sold it for $8 it'd sell.  It's worked for Yoda.   Given the pricey set with the vehicle, it would be criminal to suggest you buy the ship for just this figure - and let me tell you, it's an expensive ship.   It's about the size of the original Kenner toy, but is surprisingly packed with features - you lose retractable landing gear, but there's a lot more storage and pop-up bits, plus a really impressive dart launcher.   This is a figure worth owning and I assume most fans won't care if they get the clean or dirtier version, so get what you can - we'll look at the other version as soon as I can get it.  Hasbro did a nice job adapting this design to an action figure.

Collector's Notes: I got mine from Entertainment Earth.  A 6-inch version of this figure is sold with Rey in The Black Series.

The clean version has no peg hole and lacks the Orange detail around the bottom circle/ring. Great little figure though!

I just got my 3-pack version and while clean and lacking the orange, it DOES have the peg hole - I think we found a variant!

Mine also has no peg hole in the bottom (the 3 pack version) and no orange ring on the bottom. I would think the peg hole would be nice, but not necessary as I would really have to shake my shelf to get him to fall over. Not weighted, but doesn't tip.