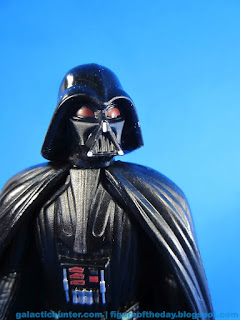 Bio: Intent on eliminating the scattered survivors of the Jedi Order, Darth Vader ruthlessly hunts them down across the galaxy. (Taken from the figure's packaging.) 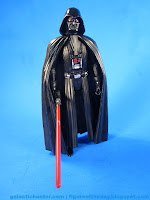 Commentary:  The vast majority of The Force Awakens line is a mix of reruns and mystery box enthusiasm - some of us spent hundreds of dollars, not knowing if we care about what we bought or not.  Some of the neatest items were in the action figure 2-packs (the shipping carton no longer reads Mission Series but rather SW E7 3.75 IN FIG 2 PACKS AST W1 15), but nobody found those in the USA on launch day - they trickled out a week or three later, depending.   One brought some exciting reruns, another brought BB-8, but Darth Vader with Ahsoka Tano is the fanboy match-up of the year.   The only figure packed at two per case in the first wave, this set doubles down on the awesome - the first-ever Rebels Ahsoka and Darth Vader figures, in animated style, at an inflated price, with cruddy "value-add" accessories that are fooling nobody.  (Sorry, Hasbro, I love ya but you had Mission Series perfect before.) 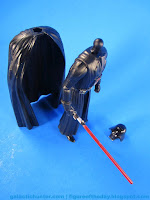 This Darth Vader figure is a new sculpt and here is a warning - the cape is only removable if you pop off his head.  Otherwise, you will tear his cape clean off.  Do not attempt to remove the cape without first popping off the head. 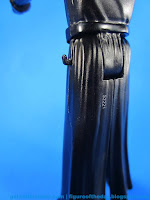 New sculpt Darth Vader figures are pretty uncommon these days, as Hasbro is keen on bringing back the same ones over and over.   Stylized Darth Vaders are not unprecedented, this one looks a lot like preproduction artwork and the Infinities action figure we got in the comic book something like eight years ago.   His costume is modeled heavily on the original film, with the ribbing on his gloves rotated horizontally and the cloth robes over his neck armor rather than under it.   The face looks even more evil than in the movies, with painted red lenses on his helmet and silver tips on his mask.  It's wonderful - they did a great job with the sculpt.

What's particularly interesting are the engineering and features of this toy.   He can stand just fine, but his legs are sadly not conducive to piloting the various TIE Fighters - I tested him in the 1990s Darth Vader model and the 2014 Inquisitor model, and his legs are too bulky to slide in the seat completely and close the hatch.  The hatch will close in the 1990s version, but he's not exactly sitting.   I'd love to see a grey redeco (with a revised seat) for this figure, because the Rebels sequences where we see Darth Vader pilot his ship are some of the most thrilling space battles I've seen in years.    Another notable feature on both Vader and Ahsoka are little hooks on their hips, presumably to store lightsaber hilts.  These aren't included, and there are no signs of any holes in their weapons to store them here.  It's clearly a vestigial tail of sorts, and sadly we are not privy to the missing accessories - perhaps Hasbro will include those over the wacky action weapons in a future repack of one or either figure.  As it is, you probably won't ever se the hook unless you pop off the cape.  It just sort of gets in the way. 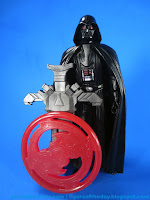 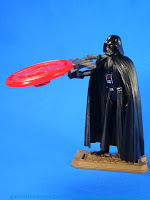 Darth Vader's new accessory is based on something we first saw in 2012 when Hasbro was experimenting on reducing articulation and adding action accessories to figures.  (I would argue that it didn't pay off.)  This weapon snaps on to Darth Vader's arm so he can launch a projectile of "the Force" across the table to knock someone over.  It's kind of fun, but not as nifty or magical as the magnets we saw in 2002 or the air blast we saw in 2003.   Vader can't stand while holding it, as gravity is a harsh mistress   Were this left out, collectors wouldn't miss it and my guess is kids will lose it over time.  It's the sort of thing you can include in a toy so Hasbro can add to the perceived value of the set, which even at $15 isn't really necessary because 2 figures for $15 is now considered a good deal. 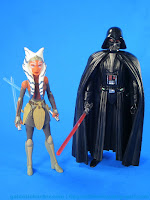 I like it.  It doesn't look a ton like my other Vaders, but the vehicle compatibility issue does irk me.  Hasbro will probably have to deliver a new version of the ship - I hope they do, given how great the Inquisitor's model turned out to be - and I'd recommend this set to everybody.  It looks cool on your desk, it has an Ahsoka in it, and it's $15.  And you can use the plug-ugly son of a disc launcher to knock over other, lesser toys.   I got my money's worth, but I'd be much happier if Hasbro could've deep-sixed the action accessories.  I wouldn't bat an eye.