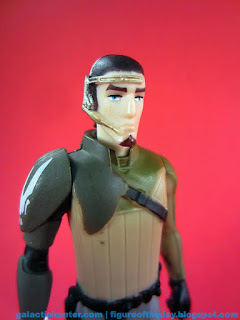 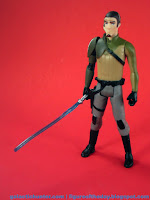 Commentary:  Despite many (many) releases over the past 12 months, this Kanan Jarrus actually has something new to offer beyond his vehicle.   The same basic body has been used for no fewer than 5 releases, with completists likely owning at least 3 by now - but this one is a little more interesting.  The same 5-jointed body from last year returns in very similar colors.  The neck swivels like real vintage Star Wars figures, and is not a ball joint like the other new The Force Awakens releases.  The head is, though, a new one - the remolded visage sports a prequel-style headset, not unlike what you've seen for Attack of the Clones through Revenge of the Sith stories.   It's mostly gold and despite being a shiny metal color, it's subtle enough to not be maddening.  I think you'll dig it, if for no reason other than it's different enough that you can tell it's different.

His deco is largely the same except for one big exception - his shoulder armor deco.  A little "02" has been added in the redesigned art, making this one even more identifiable from previous releases.  (I don't believe any other Kanan figure to date has sported the 02 - correct me if I'm wrong.)   Other than that, he's pretty much the same.  My sample has a lightsaber that's a little bent out of shape for some reason, it's not terrible but it is a little wonky given how straight most of the laser swords have been over the past 20 years. 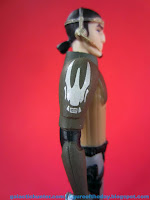 I love the vehicle, and would recommend it if I liked Kanan or not.  As luck would have it Kanan is different enough to be interesting, so I can say that this is a worthwhile set - the Scout Bomber's yellow deco and new birdlike Rebel symbol makes it feel more like an old-school 1980s Mini-Rig vehicle, even if it's a little on the big side to be one.   If you see this set, I'm pretty positive you will enjoy having purchased it.

Collector's Notes: I got mine from Entertainment Earth.   For those keeping track, Kanan has been sold as a Rebels single figure, a The Force Awakens single figure (with a unique gun), a TRU-exclusive 3-pack with Holographic Obi-Wan Kenobi, a Target exclusive repack with the Phantom vehicle, and a Mission Series 2-pack with a unique Cadet Ezra - and for all I know, I forgot one or two.  And that's not including this one.

Hi Adam,
Just wondering if you know what the 02 on Kanan's shoulder stands for. We have a Kanan fom the Target Star Wars Rebels 6 pack, from last year, that has the 02 on the shoulder. My 6.5 year old son, identified it, and came to me, asking me what it stands for, I haven't been able to google and find the answer.
Thanks so much,
LEGO and Star Wars Fans