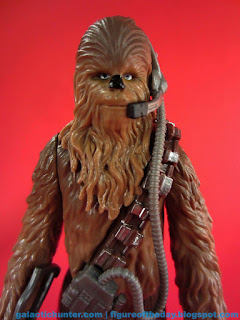 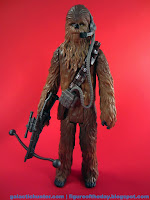 Commentary:  For a character with no pants, Chewbacca has an extensive number of action figures.   With different hair styles, snow clumps, animated versions, articulated versions, and now very old versions, he gets a lot of love - and in The Force Awakens we see he has a new bandolier and a slightly different build.  This Millennium Falcon pack-in shares parts with the "Armor Up" version, but has a different tool.  The body has a flat slot to fit the communicator on his retooled bandolier, the head has a headset, and all the limbs seem slightly crisper - with more subtle dark brown deco - than the Armor Up counterpart.

The pose and overall sculpt is very similar to the Armor Up figure, but the head is significantly different - the deco, the fur patterns on the sides, it's clearly inspired from a similar model but a different execution.  Strands separate differently, and of course there's a giant communicator on it so Chewbacca can take your order and/or provide you with excellent customer service.   I like the fact the fur contrast isn't quite as apparent here, as the darker fur on the Armor Up version almost looks wet by comparison - this just looks shaded slightly.   Chewie actually fits in the Falcon cockpit - I'm shocked, he's huge - and his bowcaster isn't.  Like the Armor Up version, it's a little simpler, a little smaller, and not shipped in separate pieces so one will fall off if you look at it funny.   While the figure lacks the articulation, and the weapon lacks the heft, it's a good, sturdy combination that works as a toy.  At this point, I'd rather have that. 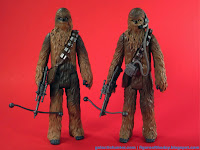 You probably already have bought (or passed on) a headset Chewbacca, but this one is different.  Since the head fur and other elements seem to be a little sharper, I'd say it's arguably worthwhile - the lack of raccoon eyes is also nifty enough to make it interesting.   As I've mentioned before, the price is prohibitive for some - this is one of the most expensive figure sets ever as far as genuinely exclusive figures go - but ship fans will probably buy it anyway, so keep an eye out on eBay for cheap, loose samples.   I'd also say that, with inflation, it's still pricey - $50 in 1995 is about $80 today.   While this toy does have extra gadgets and electronics, I can't say that, even with (let's say) $20 worth of figures, it feels like a bargain.