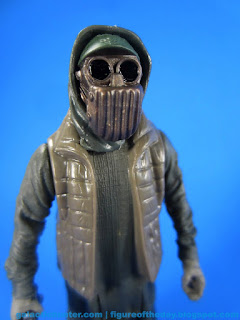 Bio: The strong-armed bullies who work for junk dealer Unkar Plutt help keep his scavenging business running on the remote world of Jakku. (Taken from the figure's packaging.) 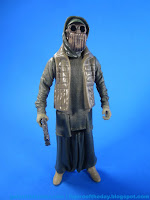 Commentary: From the copy, I'm guessing Unkar's Thug might be one of Rey's coworkers.  With his similar pole and similar employment, it would stand to reason that they may see each other at the office Christmas parties.   For the time being Unkar's Thug has no actual name and may represent what I consider to be everything you should do with a new movie line.  Specifically: 1. make obscure dudes who people will buy before they know any better.  2. Package weird dudes with the dude people want.   It's a win-win.  I don't know if I like Unkar's Thug - or for that matter, Unkar - but I do know that right now, things like the Guavian Enforcer seem damned exciting.  Removed from context, Unkar's Thug is actually a pretty fascinating costume. 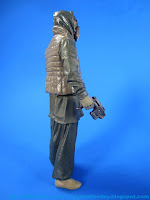 Packaged with a blaster in his hand and shown with a pole in an illustration, this costume looks not too far removed from some of the lower-budget costumes on Tatooine in Star Wars and Return of the Jedi.  With the blacked-out goggles and creepy mask evocative of Darth Vader, we know he's probably not a good guy just by looking at him.  We also know he's not wearing pants, as robes and gowns became the norm for this franchise and I find that troubling.  Seriously, what's wrong with pants?   The quilted vest looks like a lot of heat for a desert world, but we don't know if this guy is human or some sort of snow alien.  We do know that Abrams' crew brilliantly bypassed the burden of making new and believably Star Wars-y masks by giving him survival gear that looks like something out of this galaxy.   The gloves and shoes are nice, but he has problems sitting thanks to the bulky robes.  This figure feels a little undercooked with a squared-off butt area and the aforementioned can't-quite-sit legs.   The gun fits in his hand, the pole fits in his other hand, plus he looks good.  He's exquisite if you see this as a 3-pack and him as a $5 action figure.  (I do.)

With no new movie on our radar yet, this guy is really only measurable against the yardstick of other desert dwellers - Jawas, Tuskens, and the like - and he looks like a more genteel, more L.L. Bean cast-off take on that.  Those fancy shoes and vests just don't come from any space dumpster.  If I stuck this guy in the back of Jabba's Palace or a cantina display, it'd fit.   If you saw this guy as a background alien in a comic, it would be convincing.   By not buying this set, you are a bad person.   For $15, it's probably the best deal in the entire line - admittedly not high praise given the dollars vs. value proposition so far, but 3 figures for $15 works for me.  I assume his role in the movie will be about as fleshed-out as Bane Malar.