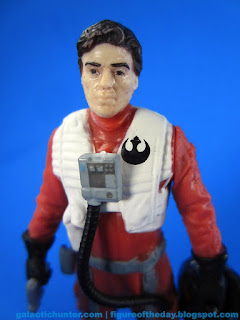 Bio: When missions call for it, ace Resistance pilot Poe Dameron becomes Black Leader, flying a dark-hulled T-70 X-wing starfighter into action. (Taken from the figure's packaging.  Man these don't get any better do they?) 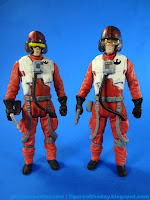 Commentary:  I'm surprised that this Poe Dameron is not the same mold as the single-carded version - you might say "but Adam!  The X-wing pilot version has a removable helmet.  You knew that."  Well, yes - but I was expecting a new head on an existing body.  What we got is surprisingly different.   For starters, let's get this out of the way - you can get this figure to fit in his X-wing, with some finesse.  You have to squeeze his arms in to fit, and to close the canopy you have to do a little dance.  Basically, you sit him in, and lean him back.  And then shove him forward in the seat, and lean him back some more - do this a couple of times and when it looks like he's ready to join the bobsled team, the waxy glass window will close over his head.  The single-carded Poe figure fits slightly better in the vehicle, with less hassle.  Now, I'm not saying Hasbro did a good job here - in the 1980s, figures generally fit in vehicles without a struggle.  There's no reason that, in 2015, I should have to put this much effort just to make a pilot figure sit in the vehicle with which he was packed.   Widening the body a tiny bit or tweaking the canopy to open at a wider point could make this a lot easier on the consumer, but the vehicle isn't a very good consumer product.   On to Poe! 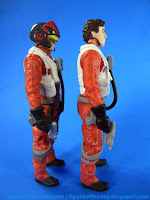 Pack-in Poe, at first glance, looks like the single carded one with a new head.  Upon closer observation, you'll notice many differences - the mold is broken up differently, with smoother detailing.  The ribbing on the various straps is much harder to see or feel, and the red plastic seems a tiny bit glossier and I daresay like 2% more translucent.  It's not bad, but it is different - as are the buttons and switches on his chest panel.  The colors are same, but sizes and intensity are altered in such a way where, side by side, you'll notice a difference.   His head still doesn't look a heck of a lot like Oscar Isaac, but the helmet may be more to your liking.  A clear visor fits snuggly over his eyes, and the angle of some of his helmet markings have changed - the right side of his helmet points in a different direction, while the "Rebel" symbol on his helmet is aligned more appropriately with the groove in the sculpt.  The texture of the flight suit is visibly smoother too, and while you might not notice this I certainly did.   The helmeted version also stands a tiny bit taller than his non-removable helmet counterpart. 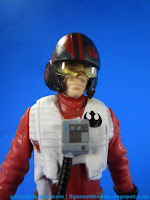 He still has a working holster, but the blaster is now a slightly less metallic shade of grey.  It works nicely, but odds are you won't notice much of a difference without a side-by-side comparison.   This Poe offers a better head and helmet, but a worse body - and you can't swap the heads due to the neck peg size differences.   If i were to make a guess, I would assume these figures both got made from the same digital scan reference and were sliced up by different engineers, thus resulting in Hasbro doing more work than necessary and quite possibly designing two "different" action figures when one with two heads could be easier.  But I could be wrong - this is just a hunch.   I like this figure just fine, but either one will do a fine job warming X-wing seats.   Even better are your old Luke pilot figures - but his day is over, so have some Poe.   Completists will of course want to get the X-wing to keep their sets complete.  With his arms sticking out a tiny bit, I'm really not at all impressed by the figure - I don't dislike it either.  It's just one more for the pile of plastic where I don't know if I like them or not yet.