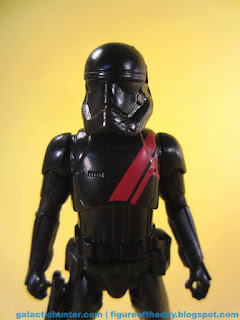 Bio: Reserved for the most experienced scouts and high-risk missions, these Elite Speeder Bikes have been upgraded with heavy blasters and powerful new engines. (Taken from the figure's packaging.)

Commentary:  I'm assuming that this Special Edition Stormtrooper and his bike are not in the new movie.  So far most of the new items we know to be in the movie say The Force Awakens under the Star Wars logo, while classic or TV characters do not, and maybe you can assume it's in the movie.  It doesn't, and you can't.   I won't, and it don't.  Interestingly both the figure and vehicle are a mix of new and old parts, from the look of things and I'd describe this set as a lateral move.   The bike is a nifty retool of the Toys R Us exclusive Speeder Bike from a few years ago - the + shaped stand hole remains in the back of the vehicle, and sadly no stand is present.  Upgraded armor and additional guns change its look, while retooled handlebars exist for the typical orientation of low-articulation figures.   Sadly the vehicle cannot stand up on its own, as the missing stand is somewhat problematic.  I assume I'll be rigging up something. 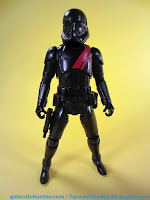 The figure's legs are new, with bend-and-swivel knees.  His hips are spread wide, not unlike the 1996 Speeder Bike with Scout Trooper's legs - this mean he stands kind of funny, and also sits kind of funny.  You can cram him on the bike but Hasbro didn't really alter the figure enough for a comfortable fit - you have to futz with it, which I dislike.  I just want it to fit, nice and easy.   Thankfully it looks neat - this seems like a crazy upgraded version of the vehicle and trooper from the movies.  The red stripes are not unlike what we saw on the TIE Fighter and a few character jackets, and the black armor has precedent in the Expanded Universe dating back to the days of Russ Manning.  (Sadly, Hasbro remains allergic to white or silver lenses in the helmets.)   His shoulder articulation is normal, and his helmet is the usual ball-jointed fare - it's good!   It's just not great.  The design is nice and all, but he doesn't look particularly natural on or off the bike - at least one of them should look good, no?

The small blaster plugs into the thigh of the armor, like so many others in this line.  It's good!  It fits in his hand too.  I assume someone is getting a 6-inch version of this armor eventually, and if they aren't they should - it's nifty.   As the black First Order Stormtrooper is currently a bike exclusive, those of you looking to get one of everybody would be well-served to pick this one up.  But as a (likely) non-movie character, I hesitate to call it essential.  It does feel like it would have been part of some mutant 1987 toy line had it lasted that long, though, so I really dig the idea of it if nothing else.   Execution could be better, but A for effort.