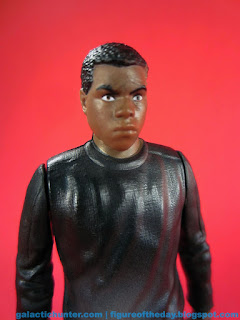 Bio: Built from scavenged parts, this Landspeeder has been customized to hold up in harsh desert terrain.  (Taken from the figure's packaging.) 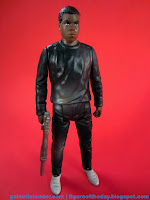 Commentary:  While clearly derived from a similar resource as the other figures, this  Finn (Jakku) is very much a different sculpt.  It's not super obvious - at first glance he looks like an unjacketed figure with new arms.  It turns out they made a number of alterations, while keeping some (but not all) of the clothing creases and wrinkles in place.  The face is a little different - I daresay better - and the textures are a bit softer, but it's certainly very interesting in that his legs are now straighter, and he looks a little dusty.   As I write this, I don't know if he or his vehicle appear in the movie thanks to the lack of "The Force Awakens" on the packaging - it could go either way.

As a toy, this one is nice - he can sit better than the other Finns, so he's an ideal vehicle driver.  The torso has been retooled in a few spots, so he no longer sports the backpack hole and his crotch area has been resculpted a bit.  The shirt isn't as textured as the other releases - it's much smoother - and his arms now match the shirt instead of the aforementioned jacket.  Where it gets weird are his legs - they look like the same sculpt, but the knees are more bent on the other Finns.  Speeder Finn has straighter legs and is much easier to stand up.  It may be my imagination, but the head sculpt seems crisper too - the nose looks different, and the eyes are painted straighter.   Overall, I like this Finn more. 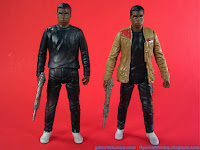 Deco is good - his clothes are unpainted save for shoes and dirt.  His hands, neck, and face are flesh tone, and his eyes have a little detail below his black hair.  It's simple, and it works - mostly it works with the vehicle, and that's what's really important as we get to these higher price points. 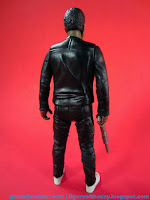 ...and I really like the speeder.  It has a few shortcomings, but the design is straight out of the 1980s.  If you put this on Ingo and had Thall Joben drive it, it could have been a cherished part of my childhood.  With Landspeeder-like engines and Speederbike-esque vanes, it seems like someone is really trying to make us think of the post-Jedi era of merchandising.  Two rockets are included, and there's onboard storage for one so you don't lose it.  There is no such storage for Finn's blaster, but you do get seating for two plus a gunner's station.  What's more, the back of the vehicle can form a makeshift seat or standing place for a figure - you can wedge it in the area which I could best call a spoiler.   The only downer in toy-ness is that it doesn't do much other than fall apart.  That gunner's station pops right apart - the turret is two pieces that aren't glued together.  It's easy to accidentally pop them apart as they are not fastened securely, which I would believe means you'll never, ever see a complete one of these at a garage sale.

I'm guessing people who only collect figures are increasingly annoyed at vehicle pack-ins, and rightly so.  The speeder looks awesome and is a treat to look at, but it isn't a ton of fun to play around with - it doesn't do much.  It's big and neat, but it may not be worth it just to get the pack-in figure.  At the right price you should absolutely get this, and if you're swimming in toy money I'd recommend it.   It's very OK, and for $20-$25 it would be fantastic.   But that's the business now - we all grew up and got jobs, so inflation happens and sort of puts us back into that "what should I spend my allowance on?" feeling rather than just spending gobs of money on whatever we please.