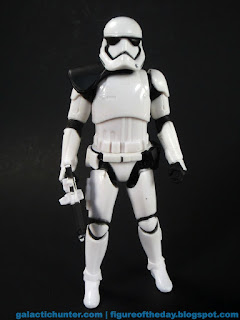 Commentary:  If you're fleshing out your ranks, odds are you'll want a Stormtrooper Officer or two.  Like other vehicle drivers, it's similar to (but not identical to) individually carded figures without vehicles.  The pose and sculpt is basically the same, but you'll notice some minor changes.  For example, the white plastic isn't quite as pure white - there are hints of yellow in spots.  It's not quite the same even texture either, as the Officer has a glossier armor than his siblings in the other assortments.   He still has a pistol, the 5 points of articulation, and the thigh holster.  My sample can't quite stand perfectly - I need to lean him forward a bit, or he'll topple over backward due to how the legs came out on mine.  Even when I tried to boil the legs to reshape them, he reverted back within a day - so I'm just going to say he makes a better vehicle driver than a shelf filler.   The vehicle has foot pegs and places for his arms, so he stands there perfectly.

Deco is good, but not spectacular.  It's no worse than the singles, with black body glove bits and an unpainted black pauldron.  If for some reason you want to put it on another figure, you can - the Stormtrooper's head pops right off.  The deco on the blaster is similar to the other single figures too, so really all that's different here to the average consumer is texture and the shade of yellow.   And the shoulder pad.

They are actually completely different in sculpt and paint job. The gun peg hole is a completely different sculpted shape and the crotch is a different mold. The whole belt part that covers his bum is a separate flap whilst the regular stormtrooper is one solid sculpted crotch. The torso is also different under the arms there is a smoother and less detailed join of the armour plates. Both legs are new sculpts too with bigger kneepads and a closer leg stance. Even the blaster is a different sculpt, it has a different shaped post to fit the different gun post hole. I can provide photos if you like. I am in the UK so it may be a variant.
Either that or your sample has the regular stormtrooper figure by mistake.

I've also checked my vehicle and it has not got foot pegs. So may be a running change?