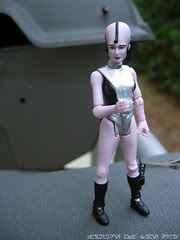 Bio: Leesub Sirln is a Qiraash and one of the patrons in the Mos Eisley cantina on Tatooine. She is hiding from Imperial authorities that suspect her of having precognitive powers and have declared her a Force adept. (Taken from the figure's box.)

Commentary: I define Leesub Sirln as "too obscure." Why? Fans didn't ask for her, you can't find her in the movie easily, and in the 1990s when she got a trading card made of her, everybody I asked told me they were pretty sure it was an airbrushed original design created just for Decipher's Premiere Edition of the Customizable Card Game. THAT, my friends, is obscure. When you have a Cantina alien that fans shrug at, that's a pretty remarkable feat.

Considering the lack of reference material, I can only guess that this figure is pretty authentic. The coloring may be slightly off, but the reference pictures I've found seem to indicate that her short shorts-- and they're plenty short-- are indeed accurate. She can stand and sit, plus she has a gun in her boot. It's a nice figure, but kids aren't interest in girls with booze and hot pants. Based on sales, neither are collectors. (A shame, I could go for more of that.) She's a great addition to any Cantina diorama if you need more figures, but at this stage in the game you probably don't. Her big pink head and silver outfit are very retro but don't necessarily fit in with the "Star Wars look" we've all become used to a few films later-- but she fits right in with the interpretation of the film as seen in the 1970s. If you can get her cheap you might as well, but the problem with figures like her is that she's quite good but ultimately a figure people didn't seem to want.

Collector's Notes: This figure was a poor seller. There's such a thing as "too obscure" and this is it-- figures were left unsold after Legacy ended. I picked up a spare of her for about fifty cents. eBay seems to agree with that price.

I love boozy girls in hot pants. In fact, I even bought the pegwarmer Leia/Xizor comic pack before I realized that I'd be looking at dozens of them for the next 2 years, and sold Xizor immediately. I felt a need for tarted up Leia in my bar. Jedi Leia from the Infinities pack is there too, as Jenny, Han's FWB.

Keep in mind Wilrow Hood and Bespin Guard bombed, too. Blacks and chicks, kids are prejudiced!

This is a figure that many fickle folks passed on intiallly (probably because they were busy buying copies of figures they already had to line up in rows on a shelf), and as such, she's a good investment if you can find her cheap. What sometimes happens to peg warmers that are never reissued/upgraded, is that collectors who passed on them decide to fill holes in their collections months, even years later.

I think Leesub was one of the best figures of 2009, and Star Wars needs background female figures. Fans that don't support them shouldn't complain when Hasbro doesn't make Duchess Satine or Jocasta Nu. *That's a triple negative there*

You gotta be kidding me, @Bravo. Jocasta Nu may be not the most desirable character in the world, but she did have appearances in a movie and the TV s how with actual dialogue. Duchess Satine had several appearances in the Clone Wars, with dialogue and combat opportunities. Leesub Sirln is a character that, I'm willing to bet, nobody even knew was in the movie prior to 1995 and to this very day most fans who aren't as crazy as we are had to look her up to know who or what she was.

...also, the track record for female characters in The Clone Wars is a little different. Ahsoka, Luminara Unduli, Aayla Secura, and Padme weren't exactly pegwarmers. It's a different audience and one that Hasbro seems to have successfully found how to market "less popular" characters to when they feel like it.