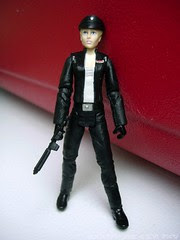 Bio: Juno Eclipse is the Imperial captain of the Rogue Shadow. She is appointed by Darth Vader to pilot his apprentice throughout the galaxy. Haunted by a tragic past, Eclipse serves the Empire loyally while secretly yearning for a new life. (Taken from the figure's packaging.)

Commentary: If at first you don't succeed, try, try again, and then sell it in a boxed set. Fans immediately took notice in 2008 when the Juno Eclipse action figure's outfit didn't quite match the design in the game, and Hasbro was hard at work on more figures based on the adventures from the Xbox, Playstation, and Wii. That wave ended up becoming boxed sets, and Juno did indeed get a retooled torso with an open jacket-- you can see it in the picture, obviously. Aside from the torso the figure is largely the same as the 2008 release, except she can sit much more easily now that the "skirt" piece of her jacket is no longer necessary. The opened jacket has the added benefit of having a specific rank badge, so she more or less matches the game's art. I don't have a whole heck of a lot to say other than "like the original release, but improved." I suppose they could do her with a new head sculpt again some day, but at this scale I don't expect to see much improvement-- this should be about as good as she gets.

Collector's Notes: At press time it seems the sets are sold through, so if you see it, grab it.