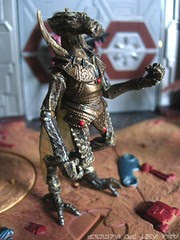 Commentary: As a heavy reworking of Sun Fac, this Geonosian Warrior turned out fairly well. The deco is incredibly bumpy and filthy, the armor has been exquisitely painted, and-- unusual for an exclusive-- Hasbro actually added knee articulation. This messy figure would make for a great army builder were it not stuck in a 2-pack with Kit Fisto, its raised price effectively limiting just how many you're likely to want to buy. At the present time, as movie figures go, this is the best basic Geonosian trooper you can get. He's got wings, he's got articulated ankles, and he has a big gun for aiming at the clone army. Hasbro did a great job bringing out the texture in its sculpt, so you'll probably want to track this one down despite having had a shot at a superior Kit Fisto figure at this point. (For the record, a Kit Fisto was packaged with this Geonosian.)

Collector's Notes: This assortment stuck around for a while, and while unlikely it's possible you might still be able to find it locally. At $13 it may be a bit of a stretch, but for $10 or less it's a great deal. On eBay, it's not worth a lot so feel free to be a cheapskate on this one.