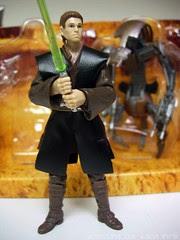 Commentary: A retooled version of the 2005 Evolutions Anakin Skywalker, this revised Attack of the Clones version makes a few notable changes-- the first of which is a new head sculpt. The previous one looked a little off, and this one does too. It's better, but Hayden Christensen's head is a tough one to pull off correctly. The colors of his robes were changed up, with the cloth elements seeming darker than the last go-round. Thankfully, the figure still has cloth rather than plastic making up his robes, so he should have no problems piloting vehicles or sitting down. As you can see in the image he has no difficulty holding a lightsaber either, and this time around he comes with a green blade one-- like the one he gets tossed after he's untied in the arena.

If you have the Evolutions figure (which was also sold in the tins and elsewhere) this may be a worthy upgrade. I see new head sculpts as being worth the effort to track down, so this one I'd say you should get. His companion figure, the Droideka, does not seem significantly different from any of the other releases.

Collector's Notes: These sets seemed to perform quite well, so they should be gone from retail in most parts of the country by now-- long gone, really. The first batch of Arena packs from 2009 stuck around for a while, so it's nice to see this set either had a smaller run or simply performed better.