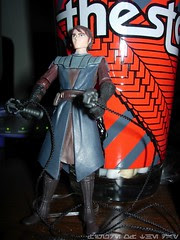 Bio: Anakin is sent to rescue the kidnapped son of Jabba the Hutt, an act that will not only save an innocent life but also give the Republic free passage through the Hutt's systems. Tracking the Huttlet to the remote planet Teth, Anakin is caught in a web of deceit and betrayal as he and his team battle to free Jabba's son...and escape with their lives. (Taken from the figure's packaging.)

Commentary: Repackaged a few times, slightly redecorated and retooled, and also completely overhauled, this first Anakin Skywalker is at just barely three years old, already something of a relic. When he was released, the Clone Wars lineup was squarely aimed at kids with main characters, action features, and good--but limited-- articulation. Anakin here doesn't have knee or ankle joints, but he is otherwise as fully-articulated as one might hope. He can sit, but his lower robes aren't too flexible so they may get in the way of putting him in certain vehicles.

The most interesting thing about this (and other) figures from the early days of this line was the abundance of accessories. Not only do you get a lightsaber, but there's a firing Force-Blast, plus a rope for him to swing down on or fly along or whatever. When there are more accessories than the figure has hands, I'm generally impressed-- so as a toy, this figure offers a lot of play value to kids but the average collector would probably prefer the space helmet version of Anakin which came later, due to its improved sculpt and added articulation.

Collector's Notes: This figure shipped on and off for a while, so he's really easy to get. He was also retooled, repackaged, and effectively thrust upon the market-- if you collected the cartoon line, you probably have one, two, or as many as a half dozen figures based on this one's mold.