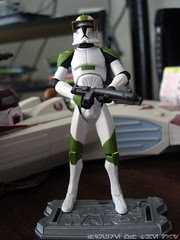 Bio: Captain Lock serves under the Jedi General Eeth Koth. The Clone Captain and his troops valiantly defend Master Koth's Jedi Cruiser when it is being boarded by General Grievous, fuiring their blasters at waves of super battle droids marching into the ship. (Taken from the figure's packaging.)

Commentary: Kmart's second single-carded exclusive of its own inside a year-- and if memory serves, ever-- Captain Lock is more than a simple repaint. Not a lot more, mind you, but Hasbro has been mixing, matching, and making new parts for its Clone molds so we're starting to see some new elements added to older molds-- like this one. The body is essentially the 2008 animated Commander Cody body, complete with antenna shoulder pad and the always popular bend-and-swivel wrist joints which are just perfect for aiming guns. He retains the old elbow armor (a minor detail), but has an all-new helmet. Unlike the other figures, the head isn't removable (unusual) and it has a flesh painted neck so many fans actually expected this one to have a face under the mask.

Aside from the fact that the elbows don't quite match the show, the figure's deco is pretty much on the mark. The dark green with brown and light yellowish green highlights match the stills I've seen fairly well, aside from the fact he seems to have more wear-and-tear on the animation model. I like it clean, though, and the figure is pretty cool and distinctive from many of the other troopers. Speaking of troopers, the members of his squad have yet to be released but I assume they'll get to them eventually.

Collector's Notes: Some notables about this one: he was a Kmart exclusive, and one of very few times Kmart got a new character as an exclusive. He was released before Hasbro announced him, as in February of 2011 they said he would be coming out in the spring-- I was at the presentation and already bought him at retail. He's also fairly obscure, with many fans not knowing who he is. He appeared in "Grievous Intrigue" in season 2 of The Clone Wars.

I really liked this guy. He is mostly a repaint and somewhat obscure, as you say, Adam, but I thought he just looked really neat. For some reason the green-deco CW troopers all seem to stand out.