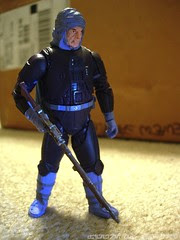 Bio: Mandalorian supercommando Fenn Shysa struggles to free Mandalore from the grip of slavers. His close friend Tobbi Dala has been captured by the slavers, but Shysa has someone they want even more: the bounty hunter Dengar. Princess Leia needs Dengar for her own reasons: he can lead her to Boba Fett, who is holding the carbonite-frozen Han Solo. But Shysa's not about to let her stop a prisoner exchange that will free his friend. (Taken from the figure's packaging.)

Commentary: When you can't do something original, at least try to do something different. Hasbro succeeds in giving us something different with Dengar sporting dual shades of purple, much like the character had in his comic book appearances. The body is the 2004 mold which, for the time, was great. Heck, if Hasbro didn't do a new one in 2010, it'd still be great. The figure's face paint on the samples I've seen are mostly quite good, and the purple is just, well, a little weird. For those of you who like weird repaints of vinyl figures or Funko's many pop art-themed exclusive packs, the Marvel Hasbro Star Wars comic pack figures are probably right up your alley. There's not a lot of articulation to be had, but ball-jointed shoulders, swivel elbows, swivel wrists, and hips make him much more than a simple statue. The colors work well with the sculpt, although it's often odd to see a figure with an incredible, realistic sculpt be given a paint job out of a Filmation TV pilot. If you love the weird, and I do, you should get this.

Collector's Notes: This figure was sold with Fenn Shysa, a character who also had multiple weird recolors of his armor in the Marvel comic series. Because Fenn is so cool and Dengar is so weird, this is a set I'd suggest tracking down if the price is right. The current price is about $5-$13, and at those rates this set is an incredible value.