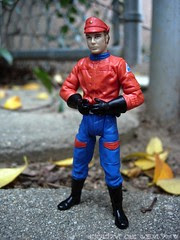 Bio: This officer is responsible for making sure that all passengers are properly boarded and secured for takeoff. Star Tours officers also manage the Star Tours droids and oversee operations in the souvenir trading post at the end of the tour. (Taken from the figure's packaging.)

Commentary: It's unusual that Hasbro makes a figure based off a cast member, but the Star Tours Officer is, basically, that. It looks vaguely like the people dressed up at the ride, made with the limitations imposed by repainting the 2001 Imperial Officer mold. Since it's based on an old design, you'll note that it doesn't have ball-jointed elbows, as those weren't used in the line very much at that time. (Or at all, actually.) The figure has the basic 6 points of articulation common to most of the figures, plus swivel gloves and biceps for added movement. He can stand and sit, which would be fantastic had Hasbro produced an adequately sized Starspeeder for him to sit in-- which, I believe I've heard, is coming in conjunction with the new ride. The bright orange deco is peppered with some blue, plus a tampo on his left shoulder which resembles the Star Tours logo. It's such a weird figure that I have to advise you to get it. The Star Tours stuff is delightfully weird, and as such, is totally worth shelling out for.

Collector's Notes: This set is still available at most Disney parks if you want it, and I believe you do. It also includes Teek, Kaink, Chewbacca, and Ree-Yees.

I was just at Disney World and could not find these anywhere. I'm wondering if they pulled them with the relaunch coming up.

Disney World clearanced them out a while back, but they were still full price at DL.

I like this figure. Can't explain why but I do.

They're still available at the Disney shops in the Orlando-area outlet malls.