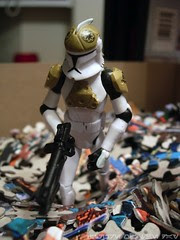 Bio: The Republic's Clone Turbo Tank is bristling with weapons and covered with thick armor. This ten-wheel titan plows through every obstacle in its path. Clone troopers take aim from laser turrets and missile ports as this heavy assault behemoth crushes anything under its massive wheels. A true mobile fortress, the Clone Turbo Tank can deploy a company of troopers and a full recon speeder team, and also serve as an armored command bunker for extended ground sieges. (Taken from the figure's packaging.)

Commentary: A revised version of the figure that it was based on, the Clone Turbo Tank Gunner has a new head that's slightly different from the 2008 AT-TE-related Clone Trooper figures. The helmet is updated with proportions more in tune to what appeared on the show, while maintaining the 14 points of articulation plus swivel-and-bend wrists that you've come to love. The deco is changed slightly, with more light greenish tan taking over for the grey and a cleaner, brighter look overall. It's a good pack-in figure, which is to say, it's different, interesting, and probably not something you'd have wanted to spent $8 on all by itself. (Although if you're a clone completeist, it's really going to set you back.)

Collector's Notes: Since the Tank has become insanely popular on the secondary market, this one will cost you. The price is on a downaward trend right now, so if you're lucky you can get a boxed one for $175 or so, or a loose one under $100. They were above $200 late in 2010, so keep an eye on the market if you want to save some money.