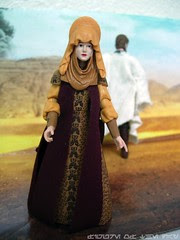 Image: My kitchen, on a G.I. Joe diorama box. I spare no expense.

Commentary: While not a highly-requested costume, Hasbro did a great job recreating Padme Amidala in her "peasant disguise." I find it funny that this qualifies as a peasant disguise, because it looks pretty damned ornate for the kind of garb you'd expect on a refugee or the lower class. According to Hasbro, the creation of this figure resulted in a bit of archival weirdness-- she wears one headdress in the movie, but the official costume photography shows another. So what is the solution? Produce and include both. (This is the correct answer, and one I hope Hasbro arrives at more often in the future.)

The figure itself is fairly ornate-- the face paint is good, and the scarf is sculpted as part of the head. The yellow headdress is removable, and a second one has been included as well. Her arms are fully jointed, and from the waist down she's basically a pepper shaker with no meaningful movement. Hasbro did sculpt legs and pants underneath, though, so that's good. The gown is covered in fine detail, with sculpted and painted accents bringing the fabric to life. To add more heft to the figure, they even included some cloth elements to make her appear slightly less stiff. All in all, a great job on a figure you probably didn't want to buy. It's nice to see this kind of effort go into a figure like this, not just because I appreciate quality but because it also means Hasbro will probably never have a reason to revisit this figure in this costume. She even has a gun, although I don't suppose you'll need it.

Collector's Notes: Like the rest of the figures from her wave, she's packed at 1-per-box. So far, it seems she sells fairly quickly so there's no real danger of her becoming a pegwarmer at this time.