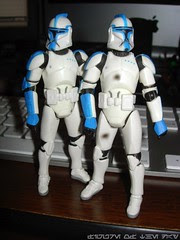 Commentary: While still pretty good, this Clone Trooper (the clean one) has been rereleased a few times and improved just slightly. The blue rank dots were moved down on the 2007 carded release, but not until after a few got out with the dots in the same position. The figure's blue color is a little bright, but hey, it's neat ain't it? Based on the super-articulated Clone Trooper of 2003-- the figure that has basically been set as the standard for fan expectations for articulation these days-- the trooper has 14 joints and a small blaster pistol. (Back in 2005, the small pistol was still an unusual accessory found mostly with pilots and deluxe figures.)

Collector's Notes: While not uncommon due to the many reissues, the boxed sets from 2005 still retail a chunk of their original price-- plus the packaging ain't bad. I'd say grab these if you can, but the single carded Saga Legends reissues are good, too. (Arguably better, in the case of the clean ones.)

As leiutenants, these should be more common in AOTC, but are rarely glimpsed.