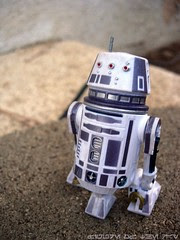 Bio: R5-C7 was an R5-series astromech droid. During the Clone Wars, he resided on Tatooine. (Stolen from Wookieepedia.)

Image: My former apartment's back yard.

Commentary: My definition of obscure as it relates to this toy line generally comes from "do you remember the name of the figure?" and "did you know who this was before it got a toy?" If the answer is no, you can say that a figure like R5-C7 qualifies as being somewhat obscure. When I first saw it, I thought it looked similar to a robot in a still from a Rebel briefing, and obviously that wasn't the origin. All fans really have to match this guy against is an image on Wookieepedia, as you probably never saw it in the actual film. The shade of purple is a little darker than the photograph, and while close the color distribution feels just a little different. It's not bad, and I don't think it needs to be redone because I can't imagine anyone is genuinely put off by the fact that the color might not match the exact palette as seen on film. The red eyes in the silver sockets look really great, and there's just a little bit of a dirt wash on this figure to bring out a little more personality. He's almost squeaky-clean and doesn't really feel like a Tatooine native, but it's cool and I dig it.

The red eyes are, to me, the selling point. There are lots of robots out there, but few in quite these colors. If you have the means, get one.

Collector's Notes: This figure came with some of the slower sellers of late 2009, many of which sat around until 2010 and beyond in some stores. A completed figure sells for about $10 on his own, but I would suggest tracking down the figures that make up this wave. Giran is an awesome, awesome toy.

I actually got all the parts to this one. I;m not an astromech fan per se, but I like R5's the best of the designs.

I also think droid parts were more fun than paying extra money for packaging that looks similar to packaging from 30 years ago, but I seem to be in the minority there. Who knows how many past peg warmers would've moved if they had a retro card?

I think this figure would sit well in a rebel briefing dio, it's close enough.

I think the reason he's not covered in Tatooine sand is because he was used on the Coruscant underworld set in "Attack of the Clones": http://www.jeditemplearchives.com/content/modules.php?name=News&file=article&sid=6513/

Bravo, I agree with you on BAD versus vintage packaging. Oh well.

This one is maybe my favorite Build a Droid astromech. Actually, I have two of them - I HAD to do two, because I HAD to get two Girans and I couldn't stop there! :)